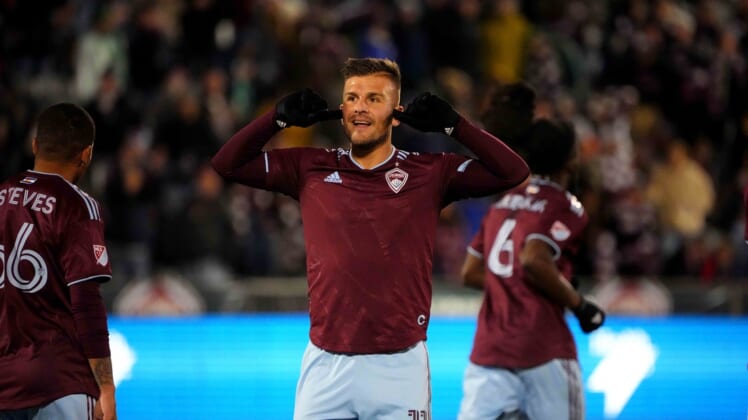 The Colorado Rapids finished with the most points in the Western Conference in 2021 but are playing nowhere near that level after seven games this season.

The Rapids (2-3-2, 8 points) will try to stop their campaign from wallowing in the mire on Saturday night when they battle expansion Charlotte FC at Commerce City, Colo.

Colorado is winless in its last four games (0-2-2) and is coming off back-to-back 3-1 road losses to FC Dallas and Minnesota United.

The Rapids haven’t been victorious since posting a 2-0 home win over Sporting Kansas City on March 12.

“It’s very much about increased resolve,” Colorado coach Robin Fraser said of what is necessary for a turnaround. “It’s really a mindset, and for us the mentality has got to be we’re going to do what we can to control games as we have, but when we have control of games, we have to be able to reward ourselves for good play.”

Charlotte FC (3-5-0, 9 points) are faring well for a first-year squad but have yet to win on the road. Charlotte FC have been outscored 9-2 while losing all four of their away games.

The latest was a 2-1 setback against the New England Revolution last weekend. Christian Ortiz scored in the 85th minute to keep Charlotte from being blanked.

Still, coach Miguel Ramirez sees those three victories on the ledger and is encouraged with his club’s performance.

“I think what has allowed us to compete in MLS is that competitive spirit they have every day,” Ramirez said. “They train really well. They always go hard. I think it’s the best thing this group has.”

Forward Karol Swiderski has been a force and has scored four of Charlotte’s eight goals. Goalkeeper Kristijan Kahlina has a 1.38 goals-against average and two shutouts.

Charlotte will look to corral forward Diego Rubio, who leads the Rapids with four goals. Rubio had the tally in last weekend’s loss to Minnesota United.

Colorado goalkeeper William Yarbrough has a 1.57 GAA and two shutouts.