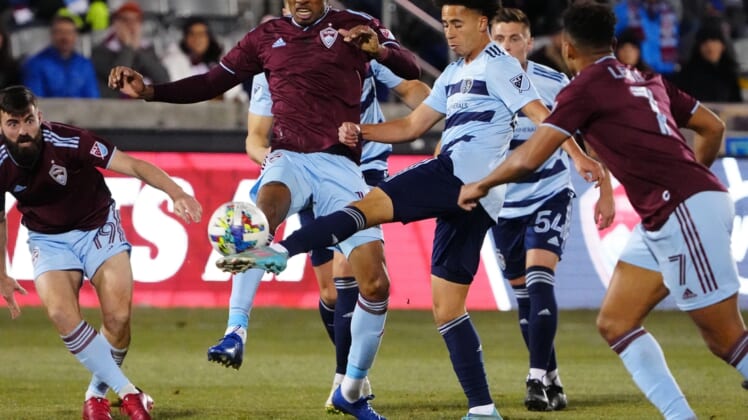 Diego Rubio scored an early goal to get the Colorado Rapids on their way to a 2-0 victory over Sporting Kansas City in Commerce City, Colo.

Mark-Anthony Kaye scored the other goal for Colorado (2-1-0, 6 points).

Sporting KC (1-2-0, 3 points) has been outscored 5-1 in two road contests so far this season. They are 0-5-4 in their last nine matches against the Rapids in Colorado.

Already short Alan Pulido, who is lost for the season with a knee injury, and Gadi Kinda, who is still a long way from his season debut with a knee injury, Sporting was playing without last year’s leading scorer Daniel Salloi, who picked up an injury in training this week. They were also without striker Khiry Shelton with a minor injury.

To make matters worse, in the 83rd minute, captain Johnny Russell was subbed out and was seen grabbing his right hamstring.

Kaye left-footed a shot from very close range to the bottom right corner in the 51st minute, picking up a pass from Steven Beitashour off a corner. Sporting kept up the pressure the rest of the match but mounted very few scoring threats.

Rubio, a former Sporting KC forward, scored his second goal in as many games in the 21st minute, putting Colorado up 1-0. Lucas Esteves slipped a perfect pass between two defenders and found Rubio open in the box. Rubio fired it past a diving SKC keeper Tim Melia into the left part of the net.

Two minutes later, the Rapids almost made it 2-0, but Melia deflected a straight-on shot from Michael Barrios.

Sporting had a hard time mounting any offensive attack until late in the first half. But in the final 10 minutes of the half, Sporting kept on the front foot, ending the half with 55 percent of the possession. Sporting also had a slight edge in shots, 6-2, though Colorado had two shots on goal compared to just one for SKC.