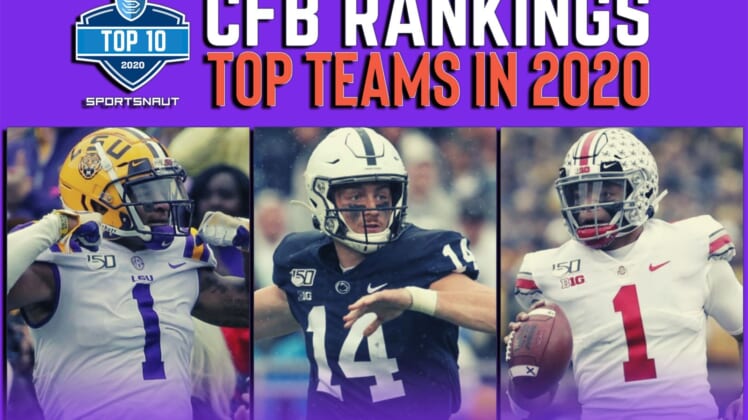 2019 was one of the most shocking years of college football in recent history. Alabama missed the College Football Playoff for the first time ever, Texas was (still) not back, and some guy named Joe broke just about every record there was.

The 2020 season has the potential to be just as great, with tons of teams stacked with talent and intriguing narratives across the country. Here’s my prediction for the ten teams that will rise to the top of college football this year.

Auburn’s 2019 season was characterized by flashes of greatness marred by inconsistent play and a brutal schedule. At times the Tigers looked like a playoff team, as they gave LSU its closest call of the season and beat both Alabama and Oregon. But Auburn also ended the season with four losses, including falling to 13th-ranked Minnesota in the Outback Bowl. If Auburn, especially sophomore quarterback Bo Nixon, can find more consistency, it has the talent to well outperform this ranking. However, the Tigers face a tough schedule once again, including a matchup with LSU and the Iron Bowl against Alabama to finish out the season.

Under head coach James Franklin, Penn State has returned to its former status as an upper echelon college football program. It has incredible talent on both sides of the ball, and another solid recruiting class coming in. Linebacker Micah Parsons might be the best defensive player in all of college football. Things are looking good for the Nittany Lions, although they are still likely to fall short of a Conference Championship thanks to Ohio State. They were ranked ninth in the final AP poll of the year, and will likely find themselves in that same area next season.

For Florida, the big question the past few seasons has been whether it can beat fellow SEC East member Georgia. Doing so would almost certainly earn the Gators a trip to the SEC Championship game, and give them a solid shot at a playoff bid. Unfortunately for Florida, it has failed to best the Bulldogs for three straight years now. Going into 2020, the Gators once again boast a very talented roster. It includes cornerback Marco Wilson, who could’ve easily been gone for the NFL, and quarterback Kyle Trask, who looked great last season stepping in after an injury. However, there’s nothing to suggest this will be the year they finally make the leap over Georgia to top of the SEC East and contender status.

Although it has had a great run in recent times, including five straight Big 12 Championships and four playoff bids in the last five years, Oklahoma has yet to reach the Championship game. Last year, as with many other years, the Sooners’ big problem was defense. They were 64th ranked in points allowed per game last season, and gave up a whopping 63 to LSU in the semifinals. On the offensive end, former 5-star quarterback Spencer Rattler should pick up where Jalen Hurts left off, but for Oklahoma to break into the ranks of the true contenders, it will have to improve defensively.

They’re the reigning national champions, fresh off an undefeated season in which they won games by an average of over 26.5 points. Many would argue they should be ranked higher. But next season’s LSU Tigers aren’t last season’s LSU Tigers for one big reason: Joe Burrow is gone. One player doesn’t win a championship alone, but Burrow’s unexpected excellence was a huge part of LSU’s dominance. Under Burrow, LSU’s offense was historic, averaging over 400 yards per game. Meanwhile, the Tiger defense was closer to average, finishing 33rd in points allowed per game. Without Burrow putting up one of the greatest college football seasons of all time, LSU will need to be a more balanced team, and won’t be as great as it was last year.

Since Head Coach Mario Cristobal took over two years ago, the Ducks have been on a steep upward trend. They went from 7-6 in 2017 to 9-4 and 12-2 in Cristobal’s first two seasons. If they improve again in 2020, they’ll certainly be Playoff contenders, although it would likely take a perfect or one-loss season for them to oust any of the more traditional favorites. Luckily for the Ducks, they certainly will have the talent to do so. They’re adding three five-star recruits to a defense that was already top 10 in the nation. On the offensive side of the ball, they’ll miss graduated Justin Herbert, but they still have plenty of pieces, including Outland winner Penei Sewell, and their defense is looking loaded enough to pick up the slack.

Alabama had a disappointing season by its standards in 2019, finishing the year ranked 13th in the nation by the College Football Playoff selection committee. For most teams this wouldn’t be too bad, but for the dynastic powerhouse that is Alabama, this was by far its worst finish in the playoff era, and the first time missing the playoff itself. With many Crimson Tide stars leaving for the NFL, it’s tempting to say Alabama’s struggles will continue. However, Alabama has been a dynasty under Nick Saban for over a decade now, and every year seems to find a new crop of talent to dominate with. It seems more likely that last year was just a blip, not the end of Alabama’s reign near the top of the college football world.

Georgia will be without last year’s starter at quarterback in Jake Fromm, but this will not keep it from putting together another successful season. For one, they added former Wake Forest quarterback Jamie Newman as a transfer, who has shown himself to be a quality dual-threat option. For another, last year their strength was actually defense, not offense. The Bulldog defense allowed the least yards per game in the country, almost 10 full yards less than second-place San Diego State, despite playing in the always stacked SEC. Adding a top-ranked recruiting class to the already stacked Georgia roster should result in another great season for the reigning SEC South champs.

In college football, having the best player very often leads to featuring one of the best teams. Ohio State and Heisman favorite Justin Fields will look to keep that trend going next season. Last year was both Fields’ and Head Coach Ryan Day’s first with the Buckeyes, and they narrowly missed a Championship appearance, falling to Clemson 29-23 in the semifinal. They will lose many standout defensive pieces to the draft, including potential top-five picks Chase Young and Jeff Okudah, but the Buckeyes’ roster is still stacked with top-tier talent. With Fields at the helm, they will almost certainly be back in the Playoff, and could easily take it at least one step further with their first Championship appearance since the first year of the playoff system in 2014.

They may have lost the National Championship to LSU, but the Big Bad Burrow is now a Bengal, and that sets up the other Tigers with a clear path to continue their trend of even-year Championship wins. Clemson returns many of its key pieces from last year, including Heisman-favorite Trevor Lawrence, stud wide receiver Justyn Ross and all-time leading rusher Travis Etienne. This trio will give Clemson the best offense in the nation. The Tiger defense lost some important pieces, but Defensive Coordinator Brent Venables’ unit should still be strong enough to get the job done alongside their dominant offense.