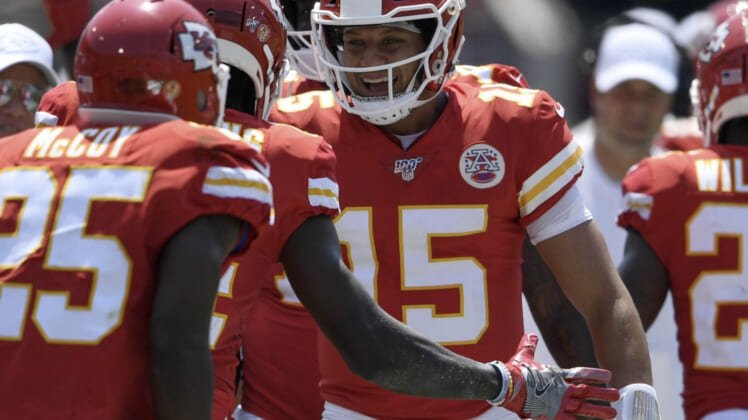 We saw some downright brilliant quarterback performances in Week 1. Dak Prescott and Lamar Jackson put up perfect passer ratings in career-best outings. Tom Brady did his thing against an overwhelmed Pittsburgh Steelers defense.

On the other end of the spectrum, multiple quarterbacks stunk it up in a big way. Jameis Winston’s turnover-proneness continued with three interceptions against the 49ers. Ryan Fitzpatrick and his Dolphins were an absolute mess in a blowout loss to the Ravens.

It’s in this that we rank the top-10 quarterbacks and the bottom-five signal callers in the NFL heading into Week 2.

This reigning NFL MVP got off to a rip-roaring start against the Jacksonville Jaguars in Week 1. Mahomes completed 25-of-33 passes for 378 yards with three touchdowns and zero interceptions in a blowout win. That included dominating Jacksonville when targeting Sammy Watkins. Mahomes is now set to take on a Raiders team that Kansas City torched to the tune of 37.5 points per game last season.

Brady pretty much toyed with what many to expected to be a good Pittsburgh Steelers defense this past Sunday night. He made sweet music with both Josh Gordon and Phillip Dorsett, completing 24-of-36 passes for 341 yards with three scores and zero interceptions. Better yet, the Pats are set to take on a Dolphins team that yielded 59 points to Baltimore last week. Blood bath incoming.

Despite throwing one bad interception last week, Brees remained at the top of his game in a comeback effort against the Houston Texans. He led New Orleans down the field for a game-winning field goal as time expired. He did so against a Texans defense that many expected to be elite this season. All said, the future Hall of Famer completed 32-of-43 passes for 370 yards with two scores and that above-mentioned pick. Brees now has a plus-level matchup against a questionable Rams defense in Week 2.

What can we say about Prescott’s Week 1 performance that has not been said? The dude was on absolute fire against a bad New York Giants defense, completing 25-of-32 passes for 405 yards with four touchdowns and zero interceptions. It was a career-best performance and has Prescott ascending the rankings heading into Sunday’s outing against a lesser Washington Redskins team. Could a repeat performance be in the cards?

It took stellar outings from Austin Ekeler and Justin Jackson at running back to help Los Angeles survive a game Indianapolis Colts team in its season opener. Though, Rivers continued where he left off during a career-best 2018 season. The veteran completed 25-of-34 passes for 333 yards with three scores and one interception in the win. He’ll now take on a Lions squad that was torn apart by Arizona Cardinals rookie Kyler Murray in a tie game last week.

It’s easy to draw conclusions and overreact. Rodgers was not himself in the debut of Matt LaFleur’s offense last Thursday against the Chicago Bears. The entire unit struggled and was lifted up by a dominant defensive performance. Even then, we can’t discount Rodgers based on one game. He’s proven himself time and time again. This week will be a darn good test at home against an elite-level Minnesota Vikings defense. Further struggles will lead to more questions.

Yet another quarterback who did not live up to expectations in the season opener. Wilson was seemingly primed for a huge day at home against what was a bad Cincinnati Bengals defense last season. He responded by completing just 14 passes for 196 yards with two touchdowns and zero interceptions. It wasn’t the jaw-dropping performance most expected. Will that change this week against a questionable Steelers defense in Pittsburgh? Bank on it.

Historical. That’s the best way to describe Jackson’s brilliant performance against the Miami Dolphins last week. The second-year quarterback completed 17-of-20 passes for 324 yards with five touchdowns in a 59-10 blowout win. What’s great about this is that he had two called runs. Talk about changing the narrative. Though, it’s important to point out the level of competition. Miami is a dumpster fire. Does Jackson have another similar performance in him against the Cardinals this week? We wouldn’t bet against him.

Wentz got through Philadelphia’s season opener without injury. That’s the first step for the oft-injured signal caller. The next step includes Wentz proving he’s worth the cash these Eagles handed him. So far, so good. The fourth-year quarterback completed 28-of-39 passes for 313 yards with three touchdowns and zero interceptions in a comeback win over Washington. He’ll now have an opportunity to follow that up against a suspect Falcons defense Sunday night.

After struggling big time in his first season with Jon Gruden at the helm, some openly wondered whether Carr was the quarterback of the future for the Raiders. In fact, Oakland looked into quarterbacks at the top of the 2019 NFL Draft. Carr responded Monday night against the Denver Broncos with what might have been the best performance of his career. He completed all but four of his 26 pass attempts for 259 yards in a flawless effort. Carr now faces the Chiefs in a plus-level matchup this week. Look for much of the same.

Tampa Bay was hoping that first-year head coach Bruce Arians and offensive coordinator Byron Leftwich would help Winston overcome his mistake-prone ways. That did not happen Week 1 against the 49ers. Winston threw three interceptions, including two pick-sixes. This came against a San Francisco defense that intercepted all of two passes a season ago. Yeah, it’s looking more and more like Winston is not the answer in Tampa.

Any hope of progression from this second-year quarterback was seemingly thrown out the window in a horrible Week 1 performance against Green Bay. Trubisky was downright atrocious, missing multiple wide-open receivers and failing to go through his reads. This follows a summer in which reports out of the Windy City were not great regarding Trubisky. He’ll now need to prove himself all over again against the Broncos and his former defensive coordinator Vic Fangio in Denver on Sunday.

We can’t blame Fitzpatrick for Miami giving up 59 points to the Baltimore Ravens last week. The team is in full-scale tank mode. We can, however, blame the veteran quarterback for failing to do anything of substance on offense. Fitzpatrick completed just 14-of-29 passes for 185 yards with a touchdown and an interception in the loss. In fact, he’s now thrown one touchdown and six picks in his past three starts dating back to last season with Tampa Bay. It’s not going to get easier with the Patriots’ stout defense coming to town on Sunday.

Was Manning terrible in a Week 1 blowout loss to the Cowboys? Not so much. He completed 30-of-44 passes for 306 yards without an interception. Though, a lot of that came in the second half with Dallas playing soft on defense due to boasting a huge lead. Manning has not changed his stripes after two disastrous seasons in Jersey. Expect regression with the team taking on a good Buffalo Bills defense this week.

Horrible. Horribad. Whatever definition you want to use, that’s exactly what Flacco looked like in his Broncos debut against a weak Oakland Raiders defense on Monday evening. He held on to the ball too long, consistently missed open receivers and made some huge mental mistakes in the surprising road loss. The stat line was decent. Flacco completed 21-of-31 passes without an interception. That’s fine. But his offense looked like a complete mess before turning it up with Oakland up two scores in the final stanza. Flacco isn’t it.