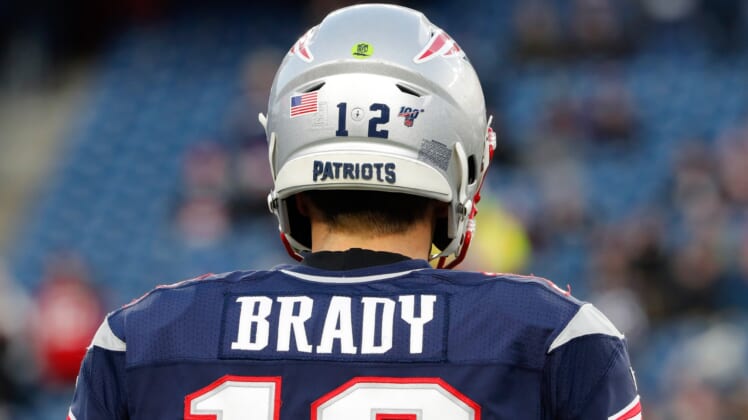 Tom Brady is generating more buzz than any NFL free agent we’ve seen hit the market in recent years. Between constant rumors and even players publicly pitching him to sign with their team, the buzz around which team Brady will sign with is real.

Many assumed for months that Brady would remain with the Patriots. After two decades with one organization and forming the greatest coach-player duo ever with Bill Belichick, Brady’s return seemed like a certainty. Now with free agency closing in, it appears increasingly likely that the future Hall of Famer will choose a different landing spot this offseason.

As many as eight teams have been connected to Brady. However, the market for the 42-year-old quarterback reportedly isn’t as strong as initially expected. While organizations like the San Francisco 49ers and Indianapolis Colts have been ruled otu, a few teams still stand out for Brady to sign with.

Now let’s take a look at the top-five best and likeliest landing spots for Tom Brady this offseason.

Deciding what team to sign with will be about more than just the roster. Brady wants his family to be happy and a chance to live in Los Angeles is the ideal situation. It’s also a move that can help him prepare for his career after football, being in the scene where he can further develop connections for his production company. Of course, there’s plenty to like about the personnel that will surround Brady as well.

If the Chargers sign the greatest quarterback in NFL history, they can use the No. 6 pick on an offensive tackle. Acquiring Trai Turner bolstered the interior offensive line and Los Angeles will have its choice of great offensive tackles from the 2020 NFL Draft. Brady will also get to work with a supporting cast of Pro Bowl receiver Keenan Allen, star tight end Hunter Henry and all-purpose back Austin Ekeler. After utilizing James White’s skills nicely in New England, Ekeler would be a trusted weapon for Brady. It’s a vastly superior cast of weapons than he had in New England and the Chargers will also have a strong defense next season. This would be a great landing spot for Brady and his family.

It’s understandable if Brady wants to prove he can win without Belichick. Stepping out of the legend’s shadow and winning without him would silence the few remaining critics left. But if he leaves the Patriots, it will burn some bridges with the fans and he risks proving the narrative that he’s a system quarterback.

The familiarity aspect is tough to look past here. Brady knows Josh McDaniels’ offense better than the back of his hand. The Patriots are committed to providing him with more weapons next season after being surrounded by one of the NFL’s worst receiving corps this past season. New England also boasts a championship-caliber defense with an improving offensive line, both of which Brady needs to succeed. It’s always the landing spot that made the most sense and, as of now, it still seems like the likeliest destination.

If Brady wants the situation where he’ll be given everything he wants, which Belichick won’t give him, Tampa Bay is the ideal landing spot. The Buccaneers are reportedly willing to give him everything he wants, including some decision power over the roster and a voice in play-calling. It’s hard to blame Bruce Arians for wanting Brady badly after watching Jameis Winston rack up turnovers like they were frequent flyer miles.

He would certainly love to work with star receivers Chris Godwin and Mike Evans. It would be the best receiving corps he’s had in years and he’d also have O.J. Howard at tight end. Furthermore, the Buccaneers could use the No. 14 pick on an offensive tackle to complete a strong offensive line. This would be a strong landing spot for Brady, even with the lingering questions around his fit in Arians’ offense.

Jon Gruden would love to make a splash before the team settles into Las Vegas and it’s hard to imagine one bigger than signing Brady. When you also have a UFC legend recruiting you and a former teammate pleading with you to join him, that can be enticing for Brady. Of course, the chance to unleash his brand in Las Vegas and play for another iconic organization also merit consideration.

Looking at this roster, though, the fit doesn’t make as much sense. Even if the Raiders draft a top receiver with their early first-round pick, this isn’t a great receiving corps. Brady benefitted from having an excellent defense supporting him in New England and that simply won’t be the case in Las Vegas unless it spends heavily, which Brady’s potential contract would complicate. The Raiders are better off drafting a quarterback for the future, while Brady can choose from other teams that would be better landing spots for him.