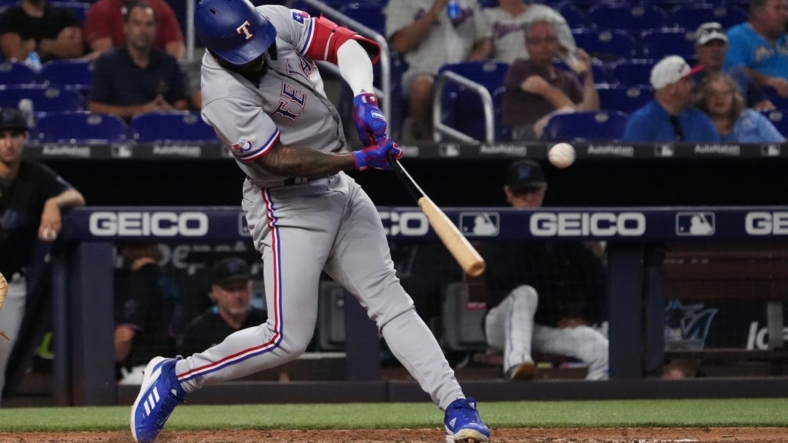 Mark Mathias drew a go-ahead, bases-loaded walk in the eighth inning as the Texas Rangers rallied to defeat the host Miami Marlins 3-2 on Monday afternoon in the first game of a doubleheader.

Reliever Jonathan Hernandez (2-2) earned the win for Texas (61-79). Jose Leclerc pitched a perfect ninth to earn his fifth save this year in five chances.

Miami starter Trevor Rogers struck out a season-best nine batters — one short of his career high — and walked two. He also allowed four hits and two runs in 6 1/3 innings.

Miami opened the scoring with two runs in the fifth. Miguel Rojas started the rally by getting hit by a pitch and reaching second on a wild pickoff throw. Ironically, the hit-by-pitch didn’t hurt as it just grazed Rojas’ jersey, but the failed pickoff nailed him in the back.

From there, Jacob Stallings walked, and both runners advanced on a bounced wild pitch. Rojas scored on Lewin Diaz’s sacrifice fly, and Stallings trotted home on Jon Berti’s single to left.

Texas tied the score 2-2 in the seventh with a rally that began with Adolis Garcia’s double and Mathias’ eight-pitch walk.

Josh Jung then hit a deep drive toward the wall in center. Marlins center fielder JJ Bleday was in position for the catch, but he seemed to close his glove a split-second too soon, allowing Garcia to score on what was ruled a double. Mathias reached third on the play before scoring on Sam Huff’s groundout.

Texas went ahead in the eighth. Okert retired the inning’s first two hitters before losing control. Corey Seager drew a five-pitch walk, Nathaniel Lowe singled, Garcia drew a full-count walk and Mathias got the RBI with another full-count walk on a borderline pitch.

The Marlins got two singles and a walk in the bottom of the eighth but failed to score. Garrett Cooper bounced into a double play, and Rojas’ groundout ended the inning. On the latter play, the Marlins challenged the call under their belief that first baseman Lowe’s foot was off the bag. However, after a video review, the call stood.