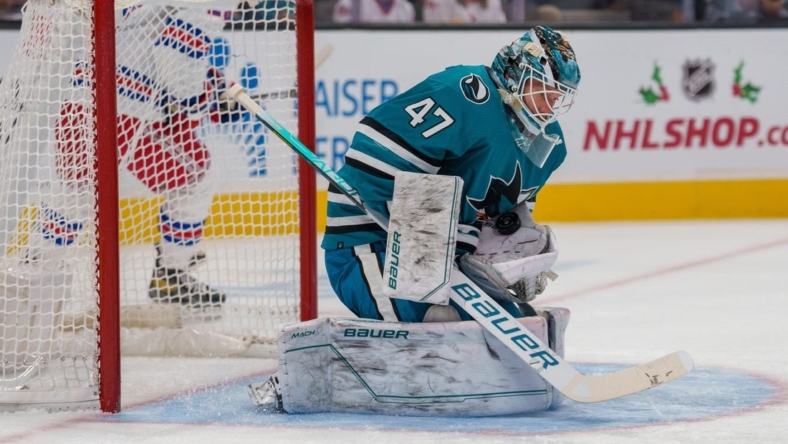 Julien Gauthier and Adam Fox scored in the final 6:03 to help the visiting New York Rangers to a 2-1 win against the San Jose Sharks on Saturday night.

Igor Shesterkin made 22 saves for the Rangers, who opened their four-game West Coast trip with a 3-2 overtime loss against the Seattle Kraken on Thursday.

Logan Couture scored with 15.1 seconds left to spoil Shesterkin’s bid for his second shutout of the season and 10th of his four-year NHL career. James Reimer had 41 saves for the Sharks, who dropped to 1-7-3 at home this season.

Gauthier scored off a deflection with 6:03 left, and Adam Fox scored into an empty net with 1:07 remaining to make it 2-0

The Sharks went 24 of 36 in the faceoff circle (60 percent), but the Rangers’ first goal was set up when center Ryan Carpenter beat San Jose’s Steven Lorentz in a faceoff in the New York zone. The puck went back to Jacob Trouba, and his slap shot from the left point was deflected into the net by Gauthier for a 1-0 lead.

Fox’s goal gave him nine points in his past five games (three goals, six assists). He also has points in eight straight games.

The Sharks were outshot 15-8 in the scoreless first period.

San Jose center Nico Sturm was briefly injured by a hit from Carpenter with 17.6 seconds left in the first period. Carpenter went to the penalty box for a boarding penalty and Sturm went to the locker room for the remainder of the period, but he returned for the second.

The Rangers killed that power play, the only one of the game for the Sharks, and went on their own at 5:16 of the second period when Timo Meier was called for holding Fox.

The Rangers hit the post twice and the crossbar once with the man advantage, but they were unable to get the puck past Reimer.

Reimer, who stopped just 14 of 20 shots in a 7-4 loss to the visiting Detroit Red Wings on Thursday, made 27 saves through the first two scoreless periods.

Shesterkin came in 3-0-1 in four career starts against San Jose with a 1.33 goals-against average and .961 save percentage. He also has one of his nine NHL shutouts against the Sharks.