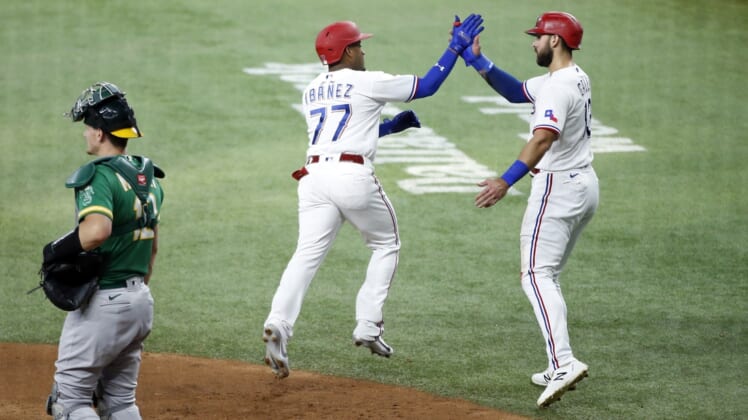 Andy Ibanez and Jose Trevino each belted a three-run homer to lift the Texas Rangers to an 8-3 victory over the Oakland Athletics on Monday in Arlington, Texas.

Kyle Gibson (5-0) tossed 5 1/3 strong innings to help the Rangers snap a six-game losing skid. The win was Texas’ fourth in its past 23 contests.

Sean Murphy launched a solo homer and Ramon Laureano added an RBI double for the Athletics, who have dropped three in a row on the heels of a seven-game winning streak.

Oakland’s Elvis Andrus received a standing ovation prior to his at-bat in the second inning. Andrus spent 12 seasons with the Rangers before being acquired by the Athletics in a Feb. 6 trade.

Brock Holt hit a one-out single to left field before coming home on Garcia’s double to center to open the scoring in the first inning. The Rangers were far from done, however, as Garcia scored on Lowe’s double to left field two batters later before Ibanez broke the game open.

Ibanez, who was recalled from Triple-A Round Rock earlier on Monday, deposited a 1-0 slider from Frankie Montas (7-7) over the wall in left field to stake the Rangers to a 5-0 lead. The homer was Ibanez’s first of his major league career.

Gibson breezed through the first four innings before Murphy recorded the Athletics’ first hit with one out in the fifth. Murphy sent a 3-2 changeup from Gibson over the wall in left field for his ninth homer of the season and third in his past six games.

Gibson surrendered consecutive doubles from Matt Olson and Laureano to open the sixth inning before exiting. He wound up allowing two runs on five hits and three walks.

Josh Sborz worked out of a bases-loaded jam in the top of the sixth inning to preserve the Rangers’ 5-2 lead.

Texas increased its advantage to 8-2 in the bottom of the frame. Trevino sending a 1-0 fastball from Montas over the wall in center field for his third homer of the season.

Montas yielded a season-high eight runs on nine hits in 5 2/3 innings. He struck out six and walked two.