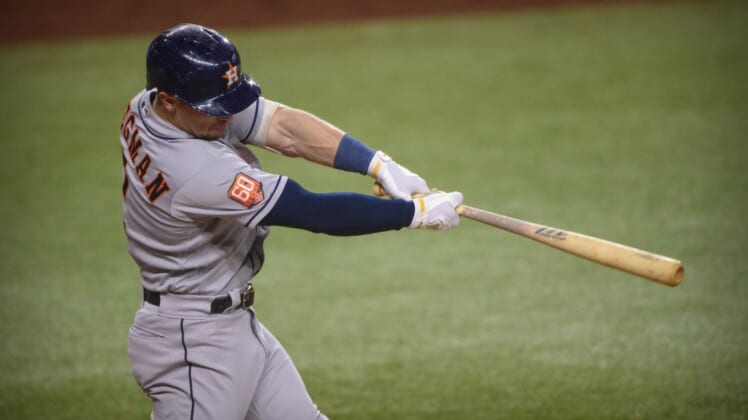 Brad Miller had the decisive run-scoring single in the eighth inning and the Texas Rangers came from behind to beat the visiting Houston Astros 5-3 on Monday in the first of a three-game American League West series in Arlington, Texas.

Adolis Garcia had a key late RBI for Texas after taking two runs away with a defensive gem.

The Rangers scored three times in their final at-bat off Houston reliever Hector Neris (1-3), who got only one out in the eighth as the third Astros pitcher and took the loss.

Texas has won three straight games, all in their final at-bat.

The Rangers’ eighth-inning uprising made a winner out of Brock Burke (4-1), the third Texas pitcher, who was perfect through the seventh and eighth innings. Matt Moore retired all three batters he faced in the ninth to earn his first save of the season.

Houston has lost four of its past five games.

The Astros took the lead in the top of the first when Yordan Alvarez’s two-out single scored Jose Altuve, who led off the game with a double.

Houston increased its advantage to 3-0 in the second, with Mauricio Dubon singling to drive home Jeremy Pena and Michael Brantley plating Dubon with a single before being thrown out on the bases.

The Rangers cut their deficit to 3-1 in the third on Kole Calhoun’s sacrifice fly that scored Leody Tavares from third base.

Garcia reached up over the wall to snag a deep fly to right field by Alvarez with one on in the fifth to keep the Astros from expanding their lead.

In the seventh, Texas got to within a run as a walk to Brad Miller and a single by Corey Seager set the table for Garcia’s single through the Astros’ shift that scored Miller from second. Houston reliever Ryne Stanek then struck out Calhoun to end the threat.

Ezequiel Duran’s one-out single in the eighth inning allowed pinch runner Charlie Culberson to score the tying run for Texas. Duran then stole second, went to third on a wild pitch by Neris and then trotted home with the lead run on Miller’s RBI single, again through the shift, to left field.

After Phil Maton relieved for Houston, Marcus Semien singled to load the bases. Corey Seager followed with a groundout that scored Miller with a huge insurance run for Texas.