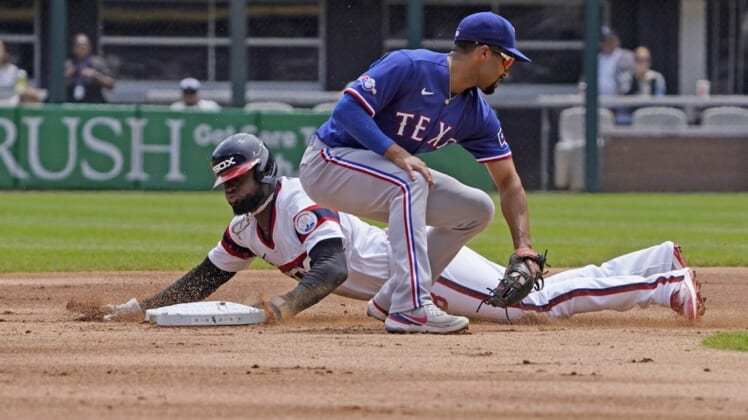 Jonah Heim lined a go-ahead, two-run single in the 12th inning and Ezequiel Duran and Eli White each had a home run and three RBIs as the visiting Texas Rangers topped the Chicago White Sox 8-6 on Sunday afternoon.

Texas took two of three to earn a series victory for the first time since winning three of four at Oakland from May 26-29. Chicago, meanwhile, lost for the fourth time in five games in a contest that saw both teams lose players to injury.

Duran’s three-run blast in the 11th put the Rangers ahead 6-3, but the White Sox rallied with three runs in the bottom half on Seby Zavala’s sacrifice fly, Danny Mendick’s triple and AJ Pollock’s bloop single.

Mendick raced to third following a violent collision between White and fellow Rangers outfielder Charlie Culberson in the left-center gap. White left the game favoring his right arm and hand.

Kolby Allard registered his first career save. The game ended on a double play, as Jake Burger flew out to Culberson at the warning track in left field and Luis Robert was thrown out trying to advance to third.

Joe Barlow (2-1) was the winner in relief after blowing a save opportunity in the 11th. Matt Foster fell to 1-2 after allowing two runs, one earned, and two hits with two strikeouts in the 12th.

Trailing for much of the afternoon, the White Sox tied the game 3-3 with one out in the seventh as Andrew Vaughn grounded a two-run single off the glove of Nathaniel Lowe at first base.

White Sox starter Michael Kopech exited the game with right knee discomfort after 13 pitches and 2/3 of an inning. The right-hander winced after throwing a called strike to Adolis Garcia.

Kopech attempted to throw a warmup pitch as manager Tony La Russa and assistant athletic trainer Josh Fallin looked on. Kopech, who entered the game with a 1.94 ERA, slammed the ball to the ground as he left the field, and the White Sox confirmed he will undergo further evaluation. Reynaldo Lopez entered in relief to finish the strikeout of Garcia.

Chicago opened the scoring with a run in the first, as Burger extended his hitting streak to eight games with an RBI single with two outs. It was the lone blemish against Rangers starter Jon Gray, who spaced one run and three hits in six innings with three walks and 10 strikeouts — Gray’s second double-digit strikeout effort in his past three starts.

Garcia went 3-for-4 for Texas, while Zach Reks and Duran had two hits apiece. Vaughn had two RBIs and Pollock went 2-for-6 for the White Sox.