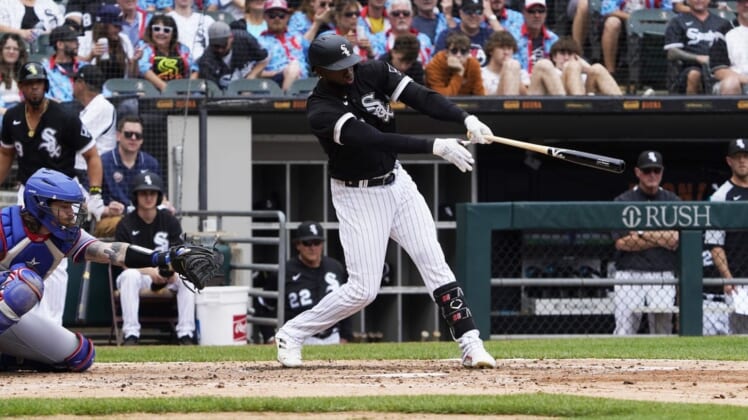 Nathaniel Lowe doubled in a run in the 10th inning to start a four-run uprising Saturday afternoon as the Texas Rangers defeated the Chicago White Sox 11-9 on Chicago’s South Side.

Lowe’s big hit in the 10th was his second double of the game and helped make a winner out of reliever Matt Moore, the fifth of six Rangers’ pitchers. Moore (3-0) struck out five in two perfect innings.

Texas added runs in the 10th on a passed ball by Chicago catcher Reese McGuire and a two-run bases-loaded single by Marcus Semien. The Rangers also got a three-run homer from Adolis Garcia earlier as they overcame a 5-0 White Sox lead.

The White Sox scored a pair of runs in the bottom of the 10th off Texas closer Joe Barlow on an RBI single by Danny Mendick and a sacrifice fly from Andrew Vaughn, Barlow got Luis Robert – the tying run at the plate — to pop out to end the game.

Matt Foster (1-1) took the loss after he did not retire a batter in the 10th, allowing four runs on three hits and a walk.

The game featured the Martin Perez drawing the start for the Rangers and Lucas Giolito beginning the game for Chicago. Neither was around for the finish.

Perez, who entered Saturday’s contest with an MLB-leading 1.52 ERA, allowed a season-high seven runs (six earned) in five innings while Giolito left the game with the lead after surrendering four runs in six innings.

The White Sox grabbed a 2-0 lead in the second when RBI singles by Pollock and Luis Robert plated Garcia and Mendick. Chicago added to its advantage in the fourth on a run-scoring double from Jose Abreu and Burger’s two-run home run.

The Rangers finally solved Giolito in the fifth. Corey Seager’s bases-loaded sacrifice fly got Texas on the board and Garcia followed with his three-run homer to left field, cutting Chicago’s lead to 5-4.

The White Sox responded in the bottom of the fifth, adding a run on a fielding error by Seager and another on a groundout by Vaughn. But Texas rallied again, tying the game on an RBI single by Miller in the sixth and a run-scoring double by Calhoun and a sacrifice fly from Jonah Heim in the seventh.