Rangers out to sweep A’s, reach .500 mark for season 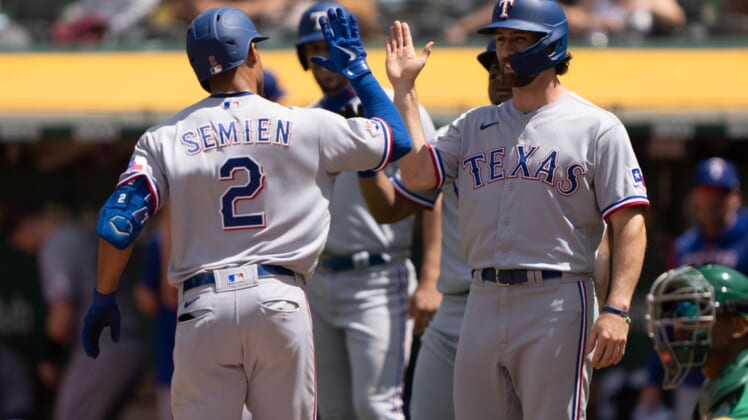 The Texas Rangers can reach .500 for the first time this season on Sunday as they bid for a four-game sweep of the host Oakland Athletics.

The Rangers matched a season high with their fourth straight win in an 11-4 victory on Saturday. Marcus Semien had a grand slam and five RBIs and Corey Seager added a two-run homer and a triple.

The grand slam for Semien, one of the Rangers’ two big offseason free agent acquisitions, was his first home run of the season. He also had a bases-loaded walk.

“You know I’ve been trying (to hit a home run) so it was nice to see that one go out — it’s been a while,” Semien said. “It was a big win. We put up some runs early — Corey had a big game today and obviously the home run by me put us up 9-1. If we can do that a little bit more, it’ll be easier on our pen.”

Seager, Kole Calhoun and Andy Ibanez each recorded three of the Rangers’ season-best 18 hits. Every starter reached base and seven different Texas players scored at least one run.

Texas is as close as it has been to the break-even mark since the first series of the year, when it lost its first two games to the Toronto Blue Jays before salvaging the finale of a three-game set.

Rangers manager Chris Woodward said his team knows that a win Sunday will get it to .500.

“I’m very aware of that, and I think the whole clubhouse is very aware that we can’t let up,” Woodward said. “It’s something that I press all the time about. Like it doesn’t matter who we’re playing, we got to keep going. We got to keep our foot on the gas. So it’s really important that we come out tomorrow and have the same mentality.”

Dunning, 27, is 0-2 with a 4.88 ERA in four outings this month. He has yet to record a decision despite notching a 1.86 ERA in three career appearances (two starts) versus Oakland.

The Athletics will counter with right-hander James Kaprielian (0-2, 5.48). He received his third straight no-decision on Tuesday despite surrendering season highs in runs (five) and hits (seven) against the Seattle Mariners.

Oakland lost the first two games of this series after its bullpen gave up runs in the ninth inning. The Athletics, however, were on the ropes from almost the start on Saturday.

Starter Zach Logue absorbed the loss in his second straight rocky outing since a short stint at Triple-A Las Vegas. He lasted just 2 1/3 innings, surrendering four runs on seven hits with one walk and one strikeout.

Ramon Laureano had a home run for the Athletics in Saturday’s loss.

“There was a big difference between his first at-bat and the next few,” Athletics interim coach Brad Ausmus said of Laureano. “He made a little adjustment after the first at-bat, and it was very noticeable immediately. You could see that he kind of freed up his swing a little. He looked more easy and fluid.”

Laureano, Chad Pinder and Christian Bethancourt had two hits apiece and Sheldon Neuse had two RBIs for the Athletics, who dropped their third straight game.