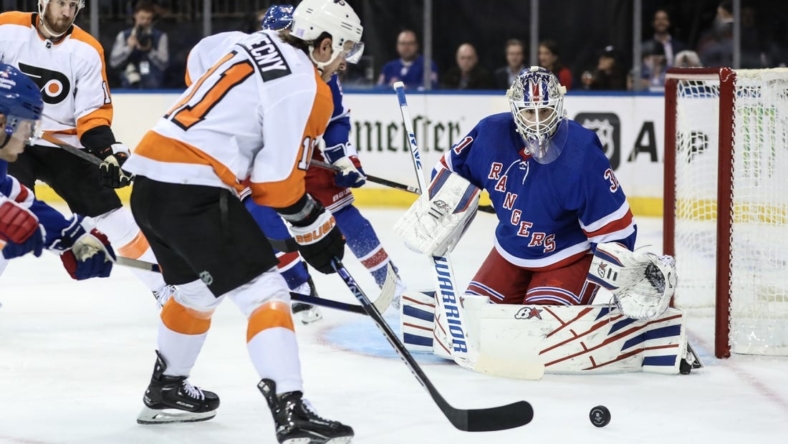 Chris Kreider’s breakaway goal with 52.8 seconds left in overtime lifted the New York Rangers to a 1-0 victory over the visiting Philadelphia Flyers on Tuesday.

After the teams were scoreless regulation, Mika Zibanejad collected a loose puck in the Rangers’ end and flipped it to Kreider, who was streaking down the middle of the ice. Kreider took the pass and slipped a backhander past goalie Carter Hart for his fourth goal of the season.

Kreider’s goal extended the Rangers’ winning streak to three games and dealt the Flyers their third loss in the past four games, though the past two setbacks came in overtime.

Rangers goalie Igor Shesterkin (6-0-2) and Hart (5-0-2) were solid, finishing with 19 and 35 saves, respectively. Hart, however, was much busier and benefited by the Rangers hitting the post four times.

The Rangers outshot the Flyers 36-19, including 30-19 in regulation. Kreider had a team-high seven shots, while Kaapo Kakko, Zibanejad and Adam Fox each had four apiece, with Zibanejad adding his seventh assist of the year.

Travis Konecny and Kevin Hayes each had a team-high four shots for the Flyers, while Justin Braun, Lukas Sedlak and Scott Laughton each had two.

Tony DeAngelo paced the Flyers in ice time at 25:44, while Fox logged a game-high 27:35 for the Rangers.

The Rangers and Flyers each went 0-for-3 on the power play.

New York controlled the first two periods, outshooting the Flyers 23-11, including 14-4 in the second period.

New York hit the post once in the first period and twice in the second, including Kreider striking iron on a breakaway while the Rangers were short-handed.

Midway through the third period, New York’s Alexis Lafreniere fired a low backhanded shot that skipped off the bottom of the post, keeping the game scoreless.

The Flyers continue their three-game road trip when they face the Toronto Maple Leafs on Wednesday. The Rangers’ four-game homestand continues on Thursday against the Boston Bruins.