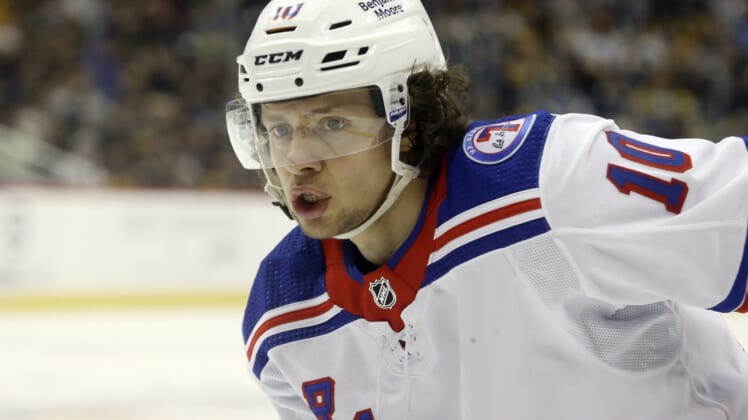 The surging New York Rangers will look to keep pace in the tight Metropolitan Division race when they host the New York Islanders on Friday.

The Rangers have 93 points, one more than the third-place Pittsburgh Penguins, a squad they beat a week ago and again on Tuesday. The Rangers are five points behind the first-place Carolina Hurricanes, a team they beat on March 20 and will face again on April 12.

Entering the season’s final month, the Rangers are in contention for a division title because of some recent results. They are on a four-game winning streak and are 8-2-0 since absorbing consecutive lopsided road losses to the Minnesota Wild and St. Louis Blues.

The Rangers have recorded each of their past three wins by one goal, giving them 21 such victories overall.

After holding on for a 3-2 win in Pittsburgh, the Rangers erased three one-goal deficits and earned a 5-4 overtime win against the Detroit Red Wings on Wednesday. Newcomer Andrew Copp scored 94 seconds into the extra session to give backup goalie Alexandar Georgiev a victory.

Panarin’s final assist helped New York get its 24th comeback win, though he would prefer the Rangers avoid falling behind at any point.

“A lot of games (have gone) like that for us this season. We can’t play like that if more important games (are) coming,” Panarin said. “It’s a big risk, not always you can do that. We’ll have to play better right away.”

The Islanders have split the first two meetings with the Rangers. They recorded a 2-1 win at Madison Square Garden on March 17 after taking a 4-1 loss in Elmont, N.Y., on Nov. 24.

The Islanders continued their improved play Thursday night, when they scored three times in the third period of a 5-2 win over the visiting Columbus Blue Jackets. Kyle Palmieri netted the tiebreaking goal early in the third. Mathew Barzal had a goal and an assist for the Islanders, who recovered after squandering a 2-0 lead.

“There’s no quit in the group. There hasn’t been all year,” Islanders coach Barry Trotz said. “There’s been at times maybe some frustration, but there’s never been any quit where they … throw up their hands and just walk away. There’s none of that at all.”

The Islanders’ remaining 16 games feature 13 contests against teams in playoff contention. After the victory over Columbus, the Islanders are 8-2-1 against Metropolitan Division opponents since Jan. 13.