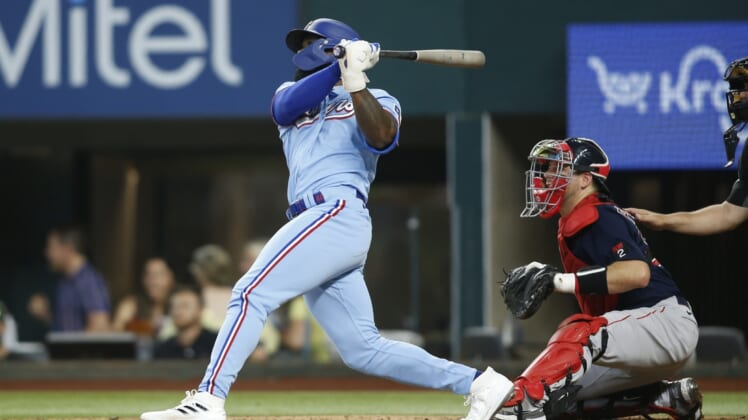 The Texas Rangers finally found some offense and will look to build on that momentum when they face the visiting Los Angeles Angels on Monday night in the first game of a three-game series in Arlington, Texas.

The Rangers snapped a two-game losing streak with a 7-1 win at home over the Boston Red Sox on Sunday. Texas’ Adolis Garcia ripped two home runs and drove in five runs, and Kole Calhoun add a pair of solo shots.

Texas had just six hits in Sunday’s win but did damage with the long ball. The Rangers scored just four runs in the first two games of the series vs. Boston and now are 9-2 this year when scoring five runs or more.

Marcus Semien, one of the Rangers’ big offseason acquisitions, snapped an 0-for-27 streak with a double in the sixth inning in Sunday’s victory.

“It’s nice to get a couple guys going,” Texas manager Chris Woodward said after the win. “Obviously we’d like to carry that into the couple of tough series we have coming up, which, you know, I can’t wait for. It will be a good test for our guys.”

Gray left his most recent start on Monday against the Yankees when he tweaked his left knee in the fifth inning. He had been on the injured list earlier in the season with a knee strain and will wear a brace on Monday.

Other than that, Woodward said Gray will have no restrictions against the Angels.

The Angels travel to Texas on the heels of a 4-1 victory in Oakland on Sunday. Los Angeles captured three of the four games against the Athletics over the weekend and has won four straight series.

Shohei Ohtani ripped a two-run home run in the first inning to stake the Angels to the early lead. Anthony Rendon drove home Taylor Ward with a key insurance run in the eighth, and Andrew Velazquez knocked in another in the ninth to back the pitching of starter Patrick Sandoval.

Sandoval allowed a run on four hits in 6 1/3 innings to earn his second victory this season. Jimmy Herget pitched the final 2 2/3 innings to garner his first save of the year.

Syndergaard already has a win over the Rangers in Arlington this season, going six innings in a 7-2 Los Angeles victory on April 16. Syndergaard grew up in Mansfield, Texas, about a 20-minute drive from Globe Life Field, and it was the first time he had pitched in his “hometown.”

“I think there’s a little bit of added pressure to that you want to go out there and perform well in front of your family and friends, but you still gotta treat it like a normal game,” Syndergaard said. “I was very pleased with the results.”