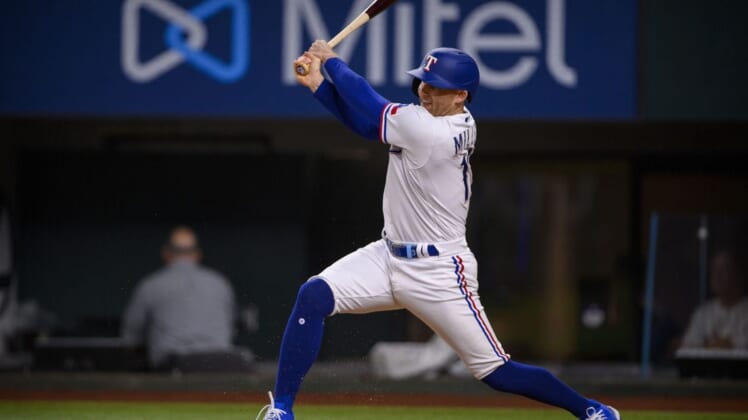 The Texas Rangers will look for their fourth straight win and attempt to continue their late-game magic when they face the Houston Astros on Tuesday in the middle game of a three-game series at Arlington, Texas.

The Rangers used speed, small ball and defense to come back from a 3-0 deficit after the second inning on Monday. They scored single runs in the third and seventh innings before tying and then taking the lead in during a three-run eighth and holding on for a 5-3 win.

During the decisive rally, Texas had three stolen bases and two bouncers to the opposite field through the Astros’ defensive shift. Only one of the Rangers’ 11 hits on the night went for extra bases.

“That was just good baseball,” Texas manager Chris Woodward said afterward. “The way that eighth inning played out was exactly how you would draw it up. We don’t always have an extra-base hit or slug. This kind of offense, this style tonight, was just to hit it where the shift isn’t.”

The low-watt production was enough thanks to excellent relief pitching, capped by Matt Moore, who earned the first save of his 11-year major league career. The 32-year-old veteran is 3-0 this season in his second stint with the Rangers and has been a stabilizing factor for the Texas bullpen.

“Just to watch the development for an older guy to kind of develop the way he has has been fun,” Woodward said about Moore. “The words of wisdom that he has are so important for what we’re trying to do down there. The success he’s had on the field has been phenomenal. He’s really found something pretty special right now.”

Texas has captured all three games of the games on its winning streak in its final at-bat, beating the White Sox on Saturday and Sunday in the 10th and 12th innings, respectively, before producing a win the in eighth inning on Monday.

The Rangers placed center fielder Eli White on the 10-day injured list on Monday after White fractured his right wrist in a 11th-inning collision with teammate Charlie Culberson a day earlier.

Dunning is 0-1 against the Astros with a 5.40 ERA in three career meetings, two of them starts. He surrendered two runs on five hits in 5 2/3 innings against Houston in a no-decision on April 25.

Dunning has dropped three straight decisions overall and has not won since April 30.

Houston fell for the fourth game in five contests in the series opener. The Astros did not have a hit after the third inning and had no baserunners after the sixth.

“That was a tough one to lose,” Astros manager Dusty Baker said. “Texas got a bunch of hits that found holes and we hit the ball hard and didn’t. The ball is just not bouncing our way — but it will, believe me.”

The Astros relievers wasted another strong effort by starter Cristian Javier, who allowed just two runs on five hits and three walks before being lifted after facing one batter in the seventh inning.

Urquidy has never lost to the Rangers, posting four wins and a 1.60 ERA in five appearances (all starts). He beat Texas on May 22, allowing one run on six hits in 6 2/3 innings with 10 strikeouts. However, Urquidy has struggled since, losing two of his three decisions while allowing 14 runs (12 earned) in 15 innings during those contests.