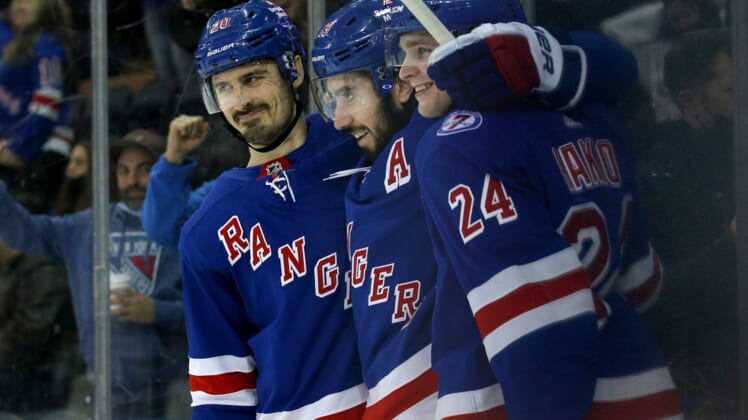 The New York Rangers will aim to extend their winning streak to three games on Monday night when they host Leon Draisaitl, Connor McDavid and the Edmonton Oilers.

After Mika Zibanejad scored the lone goal of the shootout in New York’s 4-3 victory vs. the Tampa Bay Lightning on Friday, he followed it with his eighth career hat trick two days later.

Zibanejad scored two power-play goals in the first period before tallying late in the second during a 4-0 romp over the Lightning on Sunday. He has four multi-point performances in his past five games, while Chris Kreider — who set up all three of Zibanejad’s goals on Sunday — has nine points (two goals, seven assists) during that same stretch.

“First game of 2022, let’s flip that,” Zibanejad said of his role with Kreider (team-leading 19 goals). “He has that in his game as well. He’s a goal-scorer, but he makes great passes and you have to be ready for them.”

Artemi Panarin did not participate in Sunday’s contest after being added to the NHL’s COVID-19 protocol list. Panarin leads the Rangers in points (36), while his 26 assists are two shy of defenseman Adam Fox for the club lead.

“All of our players stepped up,” Rangers coach Gerard Gallant said of playing without Panarin. “It’s very satisfying. You play a good team like that over there, they come at you, they have a lot of talent.”

Zibanejad scored two goals in New York’s first encounter against Edmonton this season, but Draisaitl’s late magic helped the Oilers post a 6-5 win in overtime on Nov. 5. Draisaitl set up McDavid’s tying goal late in the third period before scoring 3:27 into the extra session.

That victory was the ninth in 10 games to start the season for Edmonton. The Oilers eventually pushed their record to an impressive 16-5-0 before the bottom fell out, with losses in nine of their last 11 games (2-7-2).

Draisaitl scored his NHL-leading 25th goal on Saturday, but Edmonton suffered its third straight loss and second consecutive overtime defeat with a 3-2 setback to the New York Islanders.

“It’s frustrating for sure, but you have to take the point and move on,” said Draisaitl, who is riding a five-game point streak (two goals, five assists).

McDavid boosted his NHL-leading totals in assists (34) and points (53) by setting up defenseman Darnell Nurse’s goal late in the second period on Saturday. The assist extended McDavid’s point streak to five games (three goals, five assists), but the Oilers limped to another negative result.

“The season’s long, and you’re not going to go in a straight line from start to finish … you’ll have highs and lows,” Nurse said.

True, but the Oilers haven’t helped themselves with sluggish starts. Edmonton has surrendered the first goal in 10 of its past 11 games.

Ryan Nugent-Hopkins’ availability against the Rangers is uncertain after he missed his first game of the season on Saturday with an undisclosed lower-body injury.