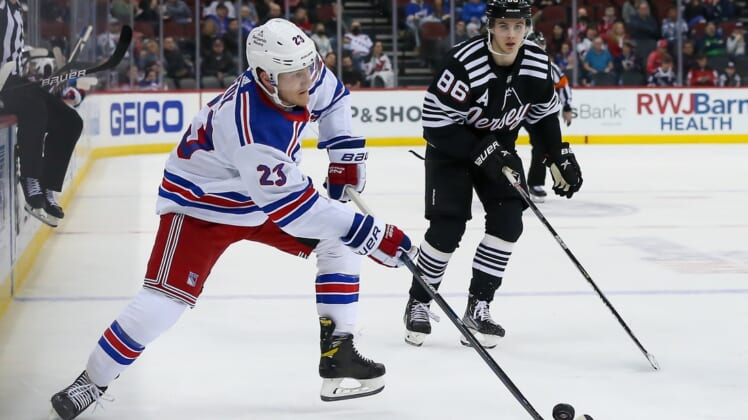 The New York Rangers and New Jersey Devils were reminded Sunday that trying to come back from three-goal deficits isn’t exactly a recipe for success in the National Hockey League.

Both teams will search for a more sustainable path to victory Tuesday night when the Devils host the Rangers in Newark, N.J., in the final clash of the season between the longtime division rivals.

Each squad was off Monday following eventful 4-3 losses Sunday in which the Rangers fell to the visiting Philadelphia Flyers in a shootout and the host Devils couldn’t complete a comeback against the Islanders.

The loss was the second straight for the Rangers (44-20-6, 94 points), who enter the week four points behind the Carolina Hurricanes in the race for first place in the Metropolitan Division.

But a spirited third-period comeback consisting of three goals — the last two of which were scored in a 12-second span — at least provided a lift for the Rangers and offered a valuable lesson as the playoffs approach.

The Rangers have qualified for the playoffs just once since the spring of 2017 — following the pandemic-shortened 2020 season, when they made the expanded field as the 10th seed in the East and were swept by the Hurricanes in a best-of-five qualifying round.

“We feel like we’re a really good team, and really good teams can come back in games like that,” said Rangers center Andrew Copp, who played in 34 playoff games for the Winnipeg Jets the previous four seasons.

“Even though we didn’t get the extra point at the end, I think the confidence gained from the way we played in the last two periods and being able to come back from something like that — which is going to happen in the playoffs, for sure, in my experience, I’ve seen it a lot. Being able to stop the momentum going the other way and turn it in our favor.”

The Devils, who are in last place in the Metropolitan Division, have grown far too familiar with watching opponents gain momentum at their expense this season.

Like the Rangers, though, the Devils found some solace in a late comeback attempt that made them feel better in the midst of a challenging stretch. New Jersey twice pulled within a goal in the third period Sunday, barely 24 hours after they squandered a four-goal third-period lead in a 7-6 overtime loss to the Florida Panthers.

“I thought we were really flat in the first period,” Devils coach Lindy Ruff said Sunday. “Maybe we were having a pity party from the night before, where we felt pretty bad about the way that game ended.”