Rangers beat Penguins, leapfrog them into second place in division 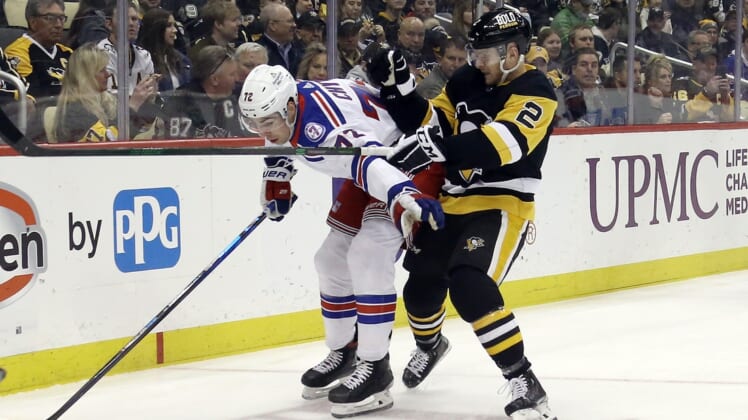 Chris Kreider’s power-play goal early in the third period Tuesday held up as the deciding marker for the visiting New York Rangers in a 3-2 win over the Pittsburgh Penguins.

The game was a rematch of Friday’s 5-1 Rangers win in New York, and the win allowed the Rangers to leapfrog Pittsburgh into second place in the Metropolitan Division.

Kreider also had an assist. Frank Vatrano and Braden Schneider also scored, and Artemi Panarin added two assists for the Rangers, who have won three straight and five of six.

Brian Boyle and Sidney Crosby scored for the Penguins, who are 1-2-1 in their past four. Pittsburgh goaltender Tristan Jarry made 23 saves.

The Penguins got the only goal of the first period. At 14:24, Brian Dumoulin took a shot from the left point. Boyle, with his back to the net, got his stick on the puck to deflect it downward and under Shesterkin’s pads for a 1-0 lead.

New York countered with two goals in the second.

Vatrano notched his fifth goal in as many games at 13:32 to tie it. Dumoulin, from deep in his end, flipped the puck high over the net. The Rangers’ Mika Zibanejad deftly settled it in the right circle and, in one motion, backhanded it over to Vatrano. From the right hash marks, Vatrano swept it past Jarry’s glove.

At 17:04, Schneider made it 2-1 with his second NHL goal. Panarin, from the right circle, passed to Schneider in the high slot for a one-timer over Jarry’s blocker.

On a power play at 1:06 of the third, Kreider pushed New York’s lead to 3-1. Panarin, at the center point, blasted the puck off the end boards. Kreider was near the left post to get to the bounce off the boards and knock it in.

Crosby closed it to 3-2 with a power-play goal at 10:37 of the third, on a slap shot from the left point that went far side with Jake Guentzel setting a screen. That gave Crosby 70 points for the 12th time in his career.