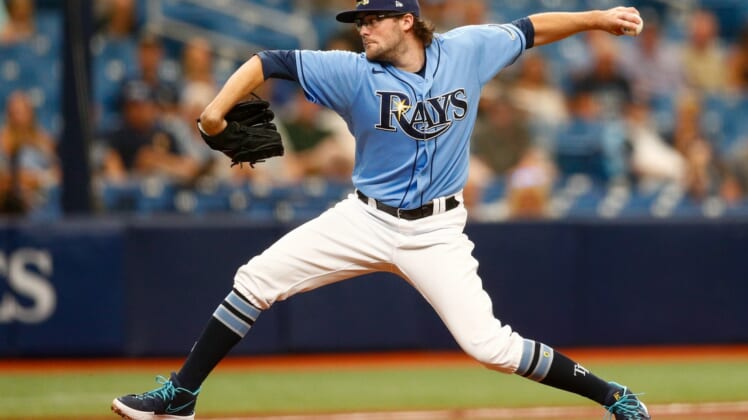 Randy Arozarena belted his first career grand slam and the Tampa Bay Rays completed a three-game sweep of the Baltimore Orioles with a 7-1 win on Sunday in St. Petersburg, Fla.

Josh Fleming (6-4) did not allow a hit over four scoreless innings for Tampa Bay, which won for the sixth time in its last seven games and improved to 23-5 since May 13.

Baltimore was held to a pair of hits and extended its club-record road losing streak to 15 games.

Taylor Walls had three hits and two RBIs for the Rays, who have won 12 of their last 13 meetings against Baltimore, including all six this season.

Tampa Bay broke the game open in the seventh, loading the bases with one out before Arozarena homered just over the right-center field fence off Cesar Valdez.

The Orioles took an early lead in the second when Pat Valaika delivered a run-scoring single off Michael Wacha, who pitched two innings as the Rays’ opener.

Tampa Bay pulled even in the third with a run against Bruce Zimmermann (4-4), who allowed three runs on six hits over 5 2/3 innings.

Yandy Diaz singled in a run with one out to score Walls, who snapped a 1-for-15 skid with a leadoff single and moved to third on a stolen base and fielder’s choice.

Diaz has reached base safely in nine straight games and has seven RBIs in his last 10 contests.

The Rays moved ahead with two runs in the fourth, with Brandon Lowe and Francisco Mejia opening with back-to-back singles.

Both runners advanced 90 feet on Joey Wendle’s grounder to first. Walls then followed with a sharp single to left field, allowing Lowe and Mejia without a throw home.

Manuel Margot and Mejia had two hits apiece for Tampa Bay, which has outscored the Orioles 48-21 this season.

Baltimore was held without a hit after Valaika’s two-out single in the second inning and had just one baserunner over the final seven frames.

Orioles cleanup hitter Ryan Mountcastle went 0-for-3 with a strikeout and is hitless in his last 13 at-bats.