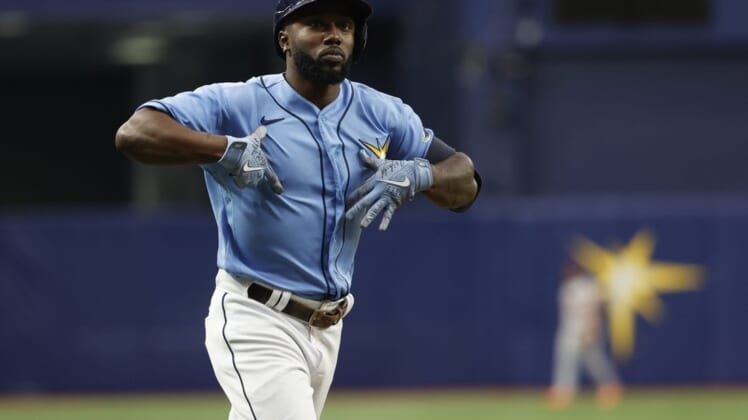 Arozarena put Tampa Bay on the board first with a two-run home run that scored Harold Ramirez in the first inning. The home run traveled an estimated 415 feet to center.

Arozarena also had a single in the third inning, but was thrown out while trying to score on a double by Brandon Lowe. After Taylor Walls walked, Phillips followed with his fifth home run of the season to give the Rays a 6-0 lead.

Entering Sunday, Arozarena was 44-for-117 in 29 career games against Baltimore with 12 home runs and 27 RBIs. His performance helped the Rays win for the sixth time in seven games entering the All-Star Break.

The Rays scored in each of the first three innings. In the second inning, Josh Lowe doubled home Phillips, who had walked.

Brandon Lowe, who was activated Saturday after missing two months with a back injury, added four hits for Tampa Bay. Francisco Mejia added a home run in the sixth inning to give the Rays a 7-4 lead.

The Rays got a solid pitching performance from Corey Kluber (6-5). He pitched six innings, while giving up four earned runs and eight hits on 83 pitches.

The Orioles scored two runs off Kluber in the fourth inning as Adley Rutschman and Ramon Urias each had RBI singles. The Orioles cut the lead to 6-4 in the sixth inning as Rougned Odor hit a two-run home run.

Relievers Brooks Raley and Ryan Thompson combined to hold the Orioles scoreless in the seventh inning. But Pete Fairbanks, who had been on the injured list since early April, gave up a solo home run to Austin Hays on the first pitch of the eighth inning to cut Tampa Bay’s lead to 7-5.

Rutschman followed Hays’ homer with a double. But Fairbanks, whose fastball consistently clocked at just less than 100 mph, retired the next three batters, including two on strikeouts.

Jason Adam had a perfect ninth inning to earn his fourth save.