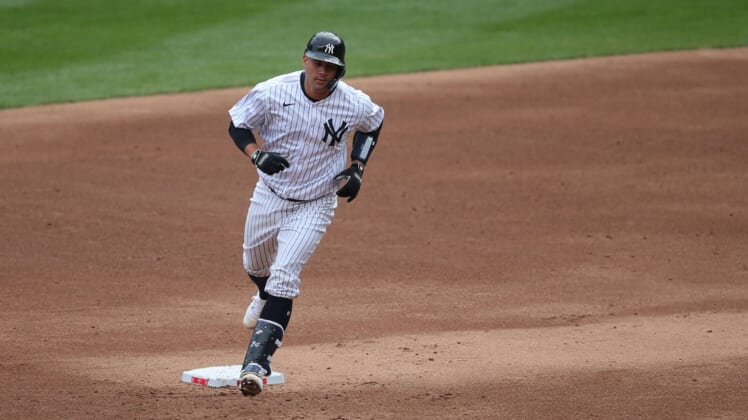 Randal Grichuk hit a tiebreaking double in the 10th inning Thursday afternoon at Yankee Stadium, lifting the Toronto Blue Jays to a 3-2 victory over the New York Yankees in the season opener for both teams.

Jonathan Davis started as the runner at second when he ran for Rowdy Tellez. Davis easily scored when Grichuk lifted a 1-0 fastball from Nick Nelson (0-1) over right fielder Aaron Judge’s head.

Teoscar Hernandez hit a game-tying homer in the sixth off Gerrit Cole and four relievers escaped trouble before Toronto went ahead.

Before Grichuk’s hit, Jordan Romano (1-0) stranded two in the ninth after retiring DJ LeMahieu and Judge. David Phelps also got Judge to bounce into an inning-ending double play in the seventh.

Julian Merryweather struck out the side in the 10th for his first career save. He finished it off by striking out Aaron Hicks, Giancarlo Stanton and Gleyber Torres, who whiffed on a 99-mph fastball.

Lourdes Gurriel Jr. drove in the other Toronto run with an RBI single in the second off Cole.

Gary Sanchez reached base three times with a two-run homer, an infield single and a leadoff walk in the ninth but the Yankees were 0-for-9 with runners in scoring position.

The game came down to the bullpens after Toronto’s Hyun Jin Ryu matched Cole.

Ryu allowed two runs on four hits in 5 1/3 innings. He struck out five and walked one.

Toronto strung together three straight hits and took a 1-0 lead in the 2nd on Gurriel’s single up the middle. Sanchez gave the Yankees a 2-1 lead in the bottom half when he blasted a first-pitch fastball into the left field seats.

New York’s lead lasted until Hernandez homered to deep left on a first-pitch slider from Cole, who was chased after issuing a walk to Guerrero.