Rams’ Robert Woods comes out on top to wear No. 2

Woods, who wore the number in both high school and at Southern California, fended off cornerback Jalen Ramsey for the honor. The two actively had been pursuing the number over social media, with Woods getting his way presumably due to seniority.

Also on Tuesday, the Rams announced new wide receiver DeSean Jackson will wear the No. 1 jersey. He wore that number while playing collegiately at California. 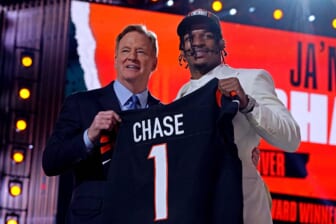