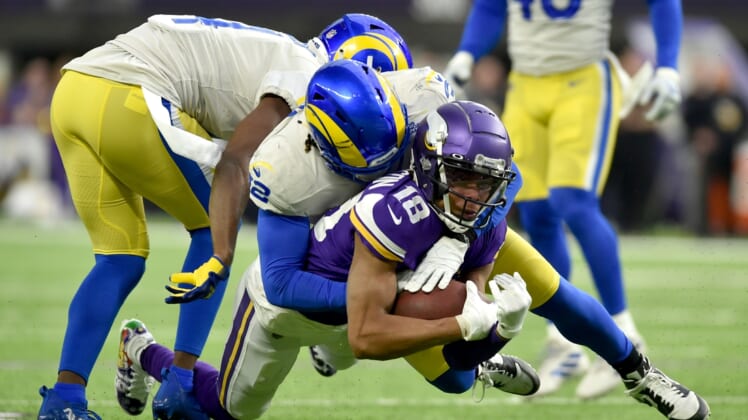 Sony Michel ran for 131 yards and a touchdown, while Brandon Powell returned a punt for a score as the Los Angeles Rams clinched a playoff berth with a 30-23 victory over the Minnesota Vikings on Sunday at Minneapolis.

Los Angeles (11-4) overcame three interceptions by Matthew Stafford, who was 21-of-37 passing for 197 yards. Stafford did connect with Odell Beckham Jr. for the wide receiver’s fourth touchdown in the last five games, while the Rams’ Cooper Kupp continued his productive season with 10 catches for 109 yards.

Kirk Cousins had 315 yards on 27-of-38 passing with a touchdown and an interception for Minnesota (7-8). Justin Jefferson had eight receptions for 116 yards, while linebacker Anthony Barr recorded two interceptions for the Vikings, who had won four of their previous six games.

Following a quiet first half that ended with the Rams leading 13-3, the Vikings got within 13-10 early in the third quarter.

Barr picked off Stafford on a tipped pass and returned it 8 yards to the Los Angeles 2. Alexander Mattison crossed the goal line on the next play.

Less than four minutes later, Powell fielded a punt and took off down the right sideline. He flipped into the end zone to cap a 61-yard sprint for his first career punt return TD — and just the second in the NFL all season. The quick-burst strike game the Rams a 20-10 lead.

Stafford and Beckham hooked up for a 7-yard TD pass on third-and-6 to extend the margin to 27-13 with 11:37 to play. Minnesota responded quickly with a 75-yard drive capped by Cousins’ 6-yard pass to K.J. Osborn, as the Vikings made it a one-score game with 8:21 left.

Los Angeles put away the game with a 13-play drive that resulted in Matt Gay’s 24-yard field goal with 2:05 remaining for a 30-20 advantage. Minnesota got a 44-yard field goal from Greg Joseph in the final minute, but was unable to recover the onside kick.

The Vikings’ only significant drive of the first half resulted in an interception, when Cousins’ pass to the end zone hit off the hands of Osborn and was picked off by Travin Howard.