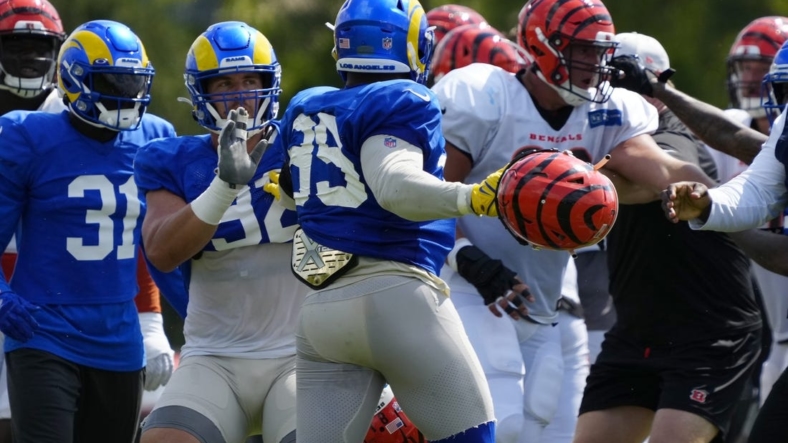 A week and a half after he was at the center of a helmet-swinging fiasco at practice, Los Angeles Rams star defensive tackle Aaron Donald is trying to keep his focus forward on a season-opening matchup against the Buffalo Bills on Thursday.

Donald, a three-time NFL Defensive Player of the Year, spoke to the assembled media for the first time since the incident at an Aug. 25 joint practice with the Cincinnati Bengals.

Video and photos of the incidents showed Donald holding Bengals helmets in both hands and repeatedly swinging one of them during a scrum before getting knocked to the ground.

“I’m happy nobody got hurt in the practice and whatever, but my main focus is Thursday night against Buffalo,” Donald said.

No fines or suspensions were announced from the NFL and the Rams said they would handle their discipline internally. Defensive coordinator Raheem Morris confirmed that the team did discipline Donald, but offered no details.

“You don’t want to swing a helmet at anybody; you don’t want that on your resume,” Morris said. “But those things happen in practices. They’re mistakes, they’re errors and they’re correctable.”

Since helping the Rams to a Super Bowl title in February in a 23-20 victory, Donald received a $40 million raise to make him the highest paid non-quarterback in the NFL. He will receive a guaranteed $65 million over the next two seasons.

Even with the healthy raise and his first Super Bowl title, Donald showed in the incident with the Bengals he has not lost any of his famed intensity.

“Everybody protected each other, everybody got out of the situation clean, healthy,” said Donald, who had a career-best 84 tackles last season to go along with 12.5 sacks. That’s what mattered.”

Donald’s three Defensive Player of the Year awards are tied for most in NFL history. He was also the Defensive Rookie of the Year in 2014 after the Rams made him the 13th overall draft pick out of Pitt. In the seven years that followed, he was named a first-team All-Pro seven times.