Rams could spend their top pick in NFL Draft on RB, per report 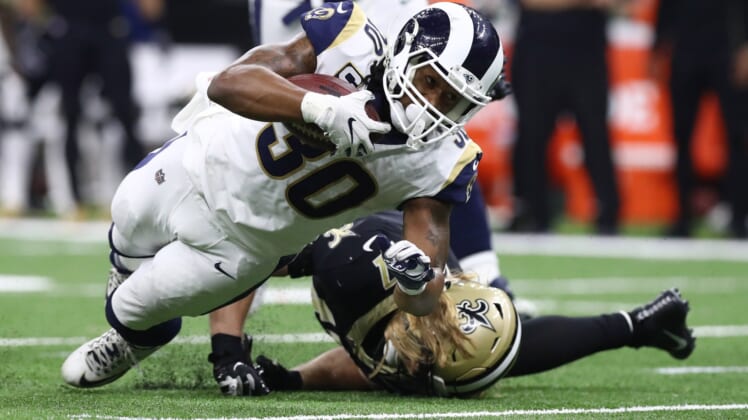 According to NFL Network’s Daniel Jeremiah, the Los Angeles Rams could target a running back with their top pick.

This is what Jeremiah had to say at a press conference when asked how high Penn State’s running back Miles Sanders might go in the upcoming draft.

“In terms of how high he could go, I’d say it’s unlikely that he goes in the bottom of the first round,” Jeremiah said, per NFLcommunications.com. “It wouldn’t totally shock me. A team like the Rams, that might surprise some people considering who they have in Todd Gurley, but they’ve done a lot of homework on running backs. Maybe that’s a scenario where they trade back if they looked at that position.”

If that is the case, this is a huge red flag when it comes to assessing the longevity of running back Todd Gurley’s shelf life. Gurley has been dealing with a lingering injury to his knee and Rams used him sparingly towards the end of the last season and in the playoffs.

Most recently, the Rams indicated they would lighten Gurley’s workload in 2019.

Gurley has a lot of wear and tear at a mere 24 years old. He’s touched the ball an average of 300-plus times per season throughout his career. It should be interesting to see what develops as the draft approaches.

Currently, the Rams pick at No. 31 and then do not have another pick until late in Round 3. A prospect such as the aforementioned Sanders might just be too good to pass up. This is providing another team doesn’t make a move for him earlier.