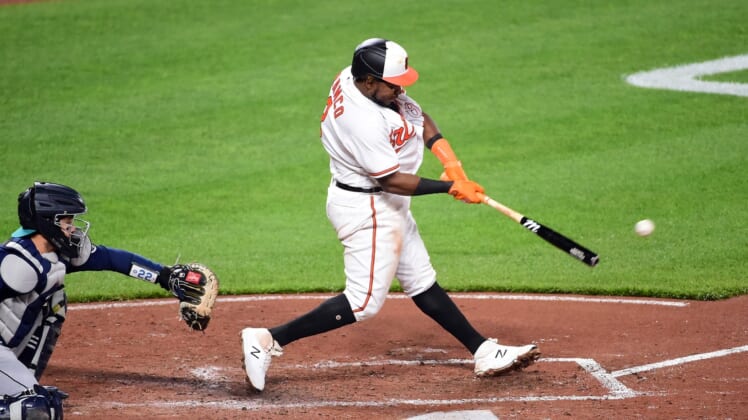 Ramon Urias’ two-out single in the bottom of the seventh inning brought home the winning run as the Baltimore Orioles defeated the visiting Seattle Mariners 7-6 in the nightcap of a doubleheader Thursday.

Mariners right-hander Casey Sadler (0-1) retired the first two batters in the seventh before walking Maikel Franco on a 3-2 count. Ryan McKenna hit a dribbler down the first base line that Sadler overran, the error putting two on. A wild pitch allowed the runners to advance and Urias lined a single up the middle to win it, snapping the Orioles’ four-game skid.

Seattle’s Sam Haggerty hit a two-run homer onto Eutaw Street in the top of the seventh to tie it, but the Mariners saw their three-game winning streak come to an end.

The Mariners, who won the opener 4-3 in eight innings, took a 4-0 lead with a four-run third off right-hander Dean Kremer, capped by Jose Marmolejos’ three-run homer to right.

The Orioles tied it in the bottom of the inning off left-hander Nick Margevicius, with Franco’s three-run double pulling them within a run before Ryan Mountcastle grounded a single to right to tie the score at 4-4.

The Orioles took their first lead of the doubleheader with two more runs in the fourth. Chance Cisco led off with a line-drive single to right and Freddy Galvis walked on four consecutive pitches, ending Margevicius’ night.

Cedric Mullins greeted right-hander Will Vest with a run-scoring double down the right field line. An out later, Anthony Santander hit a sacrifice fly to left to make it 6-4.

Margevicius, taking the spot in the rotation of James Paxton, who it was announced earlier in the day is going to have season-ending elbow surgery, allowed six runs (two earned) on six hits in three-plus innings. He walked one and struck out four.

Kremer was replaced after three innings in which he allowed four runs on four hits, with one walk and three strikeouts.