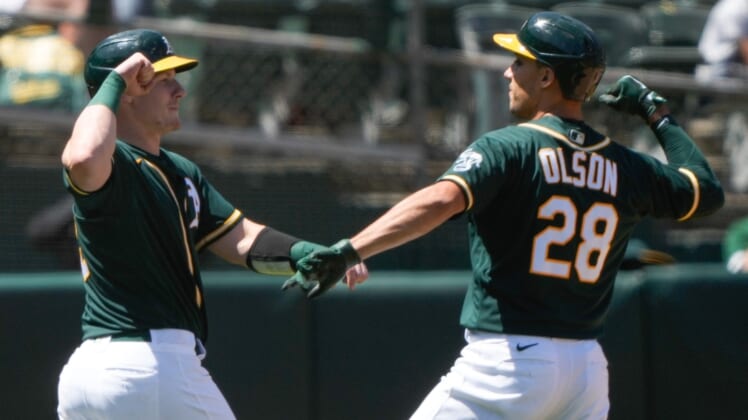 Ramon Laureano hit a two-run eighth-inning homer and the Oakland Athletics defeated the visiting Baltimore Orioles 7-5 on Sunday to salvage the finale of the three-game series.

Mark Canha singled off reliever Travis Lakins (1-2) with two outs and Laureano lined a 1-0 pitch to right center for his fifth homer of the season.

Laureano had preserved the 5-5 tie when he ended the top of the seventh with a leaping catch at the wall in center to rob DJ Stewart of at least a run-scoring double.

Yusmeiro Petit (4-0) pitched the eighth inning and Lou Trivino pitched the ninth for his fifth save.

Matt Olson had a homer, double and single for Oakland and Jed Lowrie had three hits.

Trey Mancini drove in three runs and Austin Hays homered for the Orioles, who had won three straight.

The A’s scored two in the first. Laureano singled and Olson later hit a single to right. Laureano went to third and then raced home on right fielder Stewart’s throwing error. Olson ended up at third and scored on a Lowrie’s single.

Baltimore got a run back in the second on an RBI single by Freddy Galvis, and then tied it 2-2 in the third on Hays’ homer. All four of his home runs have come against Oakland.

The A’s regained the lead in the bottom half when Orioles starter Bruce Zimmerman hit Sean Murphy and Olson homered to make it 4-2.

The Orioles tied it in the fifth. Stewart led off with a single and, with two outs, Hays singled to put runners on first and third. Hays moved up on a wild pitch and Mancini grounded a two-run single to left.

The Orioles took a 5-4 lead in the seventh. Ramon Urias walked and moved to second on an error. With two outs, Mancini lined a single to right center, scoring Urias.

Oakland tied it 5-5 in their turn when Matt Chapman scored from second on Lowrie’s infield single.