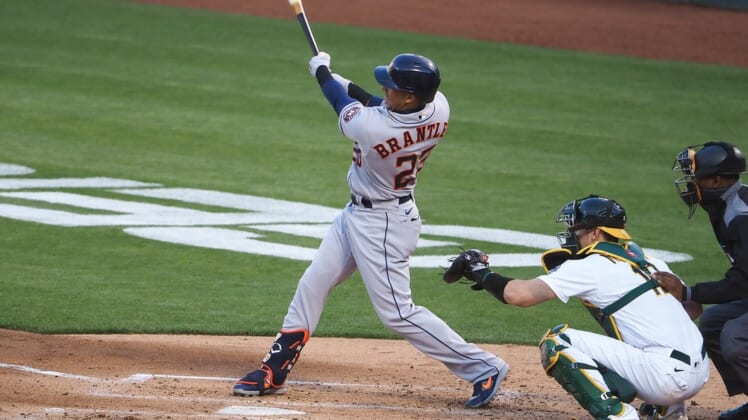 Ramon Laureano capped a big game with a walk-off sacrifice fly in the last of the ninth Tuesday night, giving the Oakland Athletics a come-from-behind, 6-5 victory over the visiting Houston Astros in the opener of a three-game series.

Down by two runs on two different occasions, Oakland broke a 5-5 tie in the ninth after Mark Canha drew a one-out walk from the fifth Astros pitcher, Bryan Abreu (2-2).

After Seth Brown’s single sent Canha to third, Laureano, who had homered twice earlier in the game, lifted a flyball just far enough into center field to allow the winning run to score and snap Houston’s six-game winning streak.

Yusmeiro Petit (5-0), who struck out two of the three guys he faced in a scoreless top of the ninth, was credited with the win.

After watching the Astros score two runs in the top of the first, the A’s rallied twice to tie, including 5-5 in the last of the eighth on an RBI double by Matt Chapman.

Houston had taken a 5-3 lead against the Oakland bullpen in the seventh on a single by Jose Altuve, an RBI double by Michael Brantley and a sacrifice fly by Yuli Gurriel.

The A’s got one back in the last of the inning on a sacrifice fly by Mark Canha, scoring Jed Lowrie.

Neither starting pitcher got a decision.

Astros starter Cristian Javier was the pitcher of record when Houston went up 5-3 in the seventh. He was charged with three runs on five hits in six innings, walking one and striking out nine.

A’s starter Sean Manaea left a 3-3 game after six innings, having allowed the three runs on 10 hits. He struck out three and did not issue a walk.

The Astros never trailed in those six innings, scoring twice in the first on a two-run, two-out double by Yordan Alvarez and again in the fourth on a solo home run by Kyle Tucker, his 10th of the season.

Oakland forged a 3-3 tie on the strength of Laureano’s two homers, his ninth and 10 of the season, and a game-tying solo shot by Matt Olson, his 10th, in the sixth.

Laureano drove in three runs and scored three times for the A’s, who retained first place in the American League West by virtue of the win.

Chapman added two hits for the A’s, who have won three straight from Houston after opening the season with five consecutive losses to their chief AL West rival.

Altuve, Brantley, Tucker, Alex Bregman and Myles Straw all had two hits for the Astros, who out-hit the A’s 13-8.