Rally boosts Red Sox’s mindset ahead of rematch with Rangers 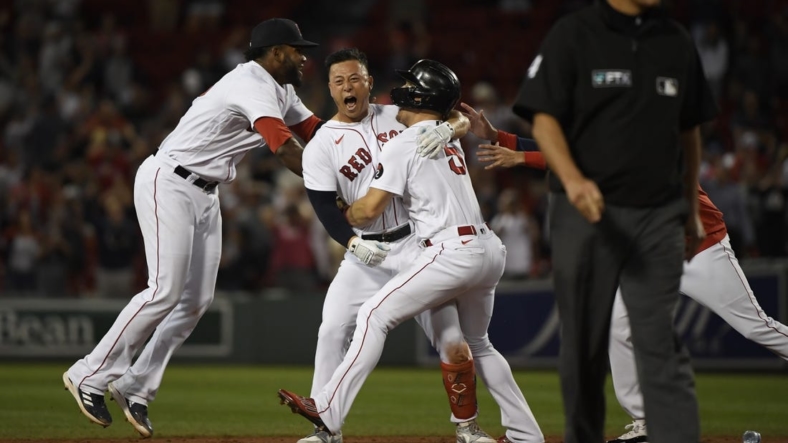 The Boston Red Sox will look to ride the momentum of a walk-off win when they continue a four-game series against the visiting Texas Rangers on Friday night.

The Red Sox erased a five-run deficit in a 9-8 win on Thursday, scoring two runs in the eighth inning and four in the ninth.

Could Rob Refsnyder’s first career walk-off hit be a springboard to a successful finish for Boston?

“When we actually got hot, we were using the whole field, the line was moving, (taking) quality at-bats,” Cora said. “The last inning is what we expect out of the lineup — swing at strikes, if not, keep the line moving.”

Another positive was third baseman Rafael Devers ending a career-worst, 0-for-24 drought. He scored the winning run after his second double of the game drove in two.

“We always talk about pitch selection and using the whole field, so tonight was a good sign,” Cora said. “It was fun to watch him locked in.”

Boston’s Nick Pivetta (9-10, 4.40 ERA) will look to snap a personal mini-slump when he starts on Friday. He hasn’t been able to match his seven shutout innings on Aug. 16 at Pittsburgh in two starts since, taking a no-decision against Baltimore and losing to Tampa Bay in his Sunday start.

Pivetta worked at least five innings in both of those games, but the Rays tagged him for five runs and eight hits to avoid a series sweep. He had a 4.08 ERA in five August starts after posting a 9.38 mark in July.

The Red Sox righty has started against Texas just twice in his career, going 1-0 with a 1.54 ERA. He held the Rangers to three hits and one run over seven innings in a May 13 win.

On the opposite side, it has been a tough year for 2015 American League Cy Young Award winner Dallas Keuchel (2-8, 8.84 ERA), who is scheduled to make his second start with the Rangers on Friday.

Texas is Keuchel’s third major league team this season. Signed by the Rangers as a minor league free agent in July, the southpaw had been pitching at Triple-A Round Rock before a Saturday start against Detroit. The Tigers tagged him for seven runs on 11 hits in 5 1/3 innings.

“Physically, I felt great. That was the main part coming in,” he said. “The way my pitches were working in Round Rock was kind of similar. It was just death by a thousand cuts, to be honest with you. It’s really tough to corral that. …

“I thought there was some weak contact there, which is … what I made my career on.”

Keuchel is 0-5 with an 11.70 ERA in his past seven major league starts, for the Chicago White Sox, Arizona Diamondbacks and Texas.

His career numbers against Boston (2-2, 8.27 ERA in seven appearances, six starts) aren’t much better. He has faced the Red Sox twice this season, most recently allowing seven hits and six runs in just two innings on May 26 for the White Sox.

The Rangers will hope for a repeat of Keuchel’s May 8 outing in Boston, when he pitched two-run ball over six innings.

Such an effort is much needed, as Texas has tied its season-high skid of five games. Things were looking good late in the Thursday contest, but Jonathan Hernandez got just one out in the ninth while yielding four runs.

“You expect to win that game, but it happens every now and then,” Rangers interim manager Tony Beasley said. “I know (Hernandez) is out there competing. It was just a tough night for him. … (Boston) did a good job of battling, competing.”