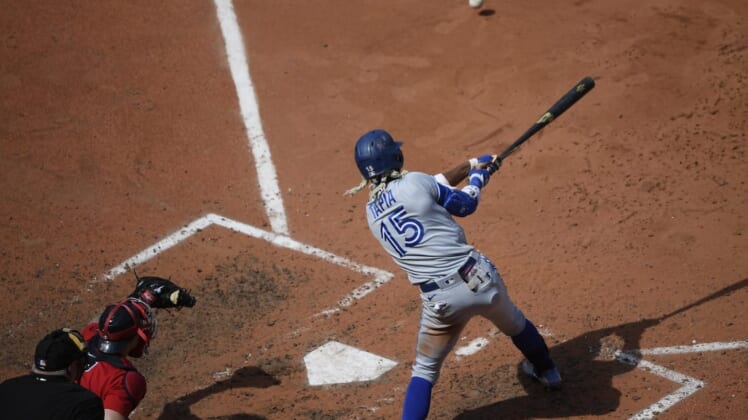 Tapia finished the series with 10 RBIs in just two games. He had six RBIs in Toronto’s 28-5 win in the series opener on Friday and didn’t play Saturday.

Vladimir Guerrero Jr. added four hits and an RBI on Sunday for Toronto.

Toronto scored five runs in the first that started with an infield single by George Springer and Guerrero’s infield double that bounced off the bag at third. Bo Bichette walked to load the bases and Cavan Biggio hit a two-run single with two outs. Matt Chapman walked and Tapia hit a three-run triple to right center.

Boston scored once in the bottom of the first when Jarren Duran doubled, Alex Verdugo singled and Xander Bogaerts hit an infield single.

Franchy Cordero led off the bottom of the fourth with a single, stole second and scored on Yolmer Sanchez’s single.

Hirokazu Sawamura walked Teoscar Hernandez to open the fifth. Chapman doubled with one out and Tapia hit an RBI single.

The next batter, Danny Jansen, grounded to third, and Jeter Downs’ throw home hit Chapman in the back to allow a run. Downs then committed an error on Springer’s potential double grounder, loading the bases. The third run of the inning scored when Sawamura failed to touch first on Guerrero’s grounder to first baseman Bobby Dalbec.

Trevor Richards allowed Duran’s triple and Verdugo’s RBI single in the bottom of the fifth.

Bradley hit his third homer of the season with two outs in the bottom of the sixth. After Sanchez walked, David Phelps replaced Richards and struck out Downs.

Phelps allowed a walk in the bottom of the seventh and was replaced with one out by Tim Mayza (4-0), who induced Verdugo’s inning-ending double play grounder to first.

Yimi Garcia pitched a perfect eighth for Toronto. Adam Cimber pitched around a single in the bottom of the ninth with three strikeouts.