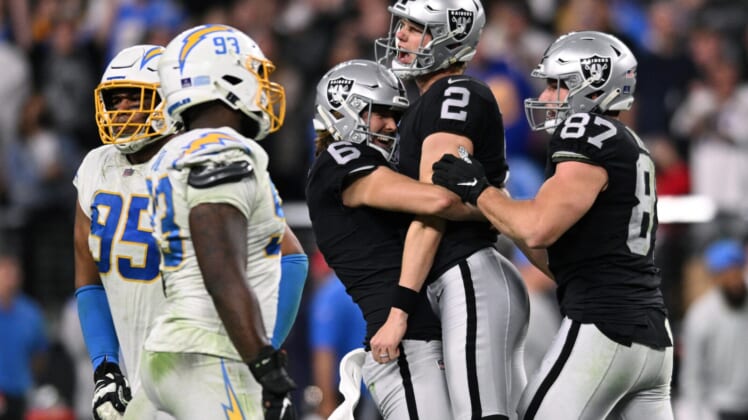 It was fitting the Las Vegas Raiders would earn their first playoff berth since 2016, and only their second in 20 years, on the final play of the last game of what has been an emotional and unbelievable year for the storied franchise.

Forty-five years to the day they won their first Super Bowl under Hall of Fame coach John Madden, who died unexpectedly in December, the Raiders played in another epic AFC battle — this time against division rival Los Angeles Chargers. It wasn’t always pretty, but Madden had to be drawing up a storm on the telestrator in the sky, watching his beloved Silver and Black gut out their fourth win in a row in overtime, beating the Chargers 35-32.

“It was really incredible,” interim coach Rich Bisaccia said after the game of the year candidate was over. “Two good quarterbacks out there playing an unbelievable division game, to come down to the end like that. We have a team that cares about each other. A team that knows what to do. A team that competes with a relentless effort down in and down in and down in. We just find a way to have a chance to win at the end.”

That the Raiders did, yet again, to win their fourth straight and earn a date Saturday in Cincinnati with arguably the league’s hottest quarterback in Joe Burrow.

Once, I think, I can get some sleep and wake up in the morning, maybe it’ll hit me then, but I just have this weird feeling in my heart like the job is not done.

On an emotional day, where the family of John Madden lit the Al Davis Memorial Torch in the north end of Allegiant Stadium, the Raiders just won, baby. Yes, the drama was at the end of the possible tie, but that’s just hyperbole. The Raiders, who could have taken a knee and still gone to the playoffs (instead, playing a road game at Arrowhead against their arch-rival Kansas City Chiefs), leaned on Josh Jacobs for a last first down and a shot at a field goal by the automatic Daniel Carlson. All the talk of the tie, Chargers coach Brandon Staley’s timeout, and whatever else the social media mob is talking about doesn’t matter. The Raiders defeated their rival and are in the playoffs.

Bisaccia talked about the final run from scrimmage and not going for the tie but the win.

“We had a conversation about it towards the end there, but if you remember, we ran the ball early, they didn’t call a time out,” Bisaccia recalled. “So, we thought probably that they were doing the same thing. We thought that if we can have a run in there that could possibly get us in field goal position to win it, we were going to do that and that is what we did.”

Everything seemed to go the Raiders’ way in this one, even when they struggled. Yes, Justin Herbert and the Chargers are a good team and talk of the QB being overrated is ludicrous. The kid may not have won, but he showed why the Raiders have to continually build a defense as he’s just getting his career started.

The Raiders continued to struggle on offense, especially in the red zone. They didn’t take advantage of excellent field position, which could have, perhaps, put the Chargers away early after LA started slow and out of sync. Instead, the Raiders had to give their 62,000+ fans higher stress levels. But, would anyone want it differently after what was a fantastic contest?

The Raiders continued to show why no one wants to play them in the postseason, especially in overtime, where they moved to 5-0 this season. They’re dangerous and they believe in one another.

As I said on our radio shows this week, this game was also about Derek Carr. One of the league’s better quarterbacks, Carr has put up great numbers at times, but he hasn’t been able to get his team into the playoffs. He did it in 2016 before a broken ankle derailed his and the Raiders’ chance at a meaningful run in the postseason. HIs night wasn’t one to write about in the history books, but it didn’t matter. He led his team on another game-winning drive and the win is all that matters.

“Once, I think, I can get some sleep and wake up in the morning, maybe it’ll hit me then, but I just have this weird feeling in my heart like the job is not done,” Carr said of what will be his first playoff appearance in his eight-year career. “Like my favorite player, Kobe said, ‘Job is not done.’ It does feel good, it’s exciting, but I don’t set out to just make the playoffs, although it’s been since 2016 and I didn’t even get to play. It feels cool. It’s awesome, but you know our goals. This is one of them, but there is more after that, too. We’re excited, and we got to play a team that already beat us. It’s going to be tough.”

For all the hate and detractors Carr has within his fanbase, it’s hard to argue he’s doing exactly what they all criticized him for not doing in his career — winning when it matters most. To think this team was 6-7, unable to score, and facing yet another late-season collapse, Bisaccia, Carr and the Raiders spirited defense put them in the playoffs with a four-game winning streak. It was improbable. I didn’t see it happening, nor did many who wrote off the team. I picked them 9-8 on the season. They did one game better and that made them a playoff team.

After losing coach Jon Gruden after five games, their top wide receiver to a fatal alleged DUI accident, their top offensive player to injury over five of the final six weeks, this team continues to defy the odds and conventional wisdom.

“I was talking to Mr. Davis in the locker room,” Carr said after the game when asked about the Raiders and their tumultuous 2021 season. “One of the things we were talking about is like I don’t think any team has been through what we’ve been through in 10 years, let alone one year—so much emotion. Pick a story, you know? So much with everything that we’ve done. My brother said it best ‘This team was forged in the fire,’ and I kind of like that.

“We went through some stuff, some refining, some hard times, but we locked the doors every day on Monday, and the people that were inside that building didn’t stop believing in this. It showed today. We made it to the playoffs. It’s awesome, it’s probably the coolest accomplishment I think I’ve ever had in my life, football-wise. To see where we were at, everything we went through, and to still make it, no record, nothing. This was the coolest thing to see. This team come together and be able to still decide that this is what we wanted to do, it’s a cool feeling, that’s for sure.”

It’s a storyline, but Madden and late owner Al Davis would have relished it. It was a textbook old-school Raiders run by a team no one gave a real chance five weeks ago. Groups like that are dangerous in the playoffs and Las Vegas is gaining confidence.

Las Vegas turns out and creates a homefield advantage

Vegas loves a winner and the booming town is starting to embrace their Raiders on this epic run. Allegiant Stadium was loud, proud, and critical in helping their team prevail. Even the much-maligned Las Vegas crowd turned in their best performance of the season.

“This one blew it out of the water. It felt like a playoff game,” Carr said after the game of the Raider Nation turnout. “It was really good to see not very many light blue powder jerseys in the stands. There were some and I give them credit. Our fans did a good job of representing and being loud. I saw one time when they were holding that thing up, the decibels, it was getting up to. That’s a pretty cool feeling.”

A packed, raucous crowd, a win, the playoffs: that is an incredible feeling.

It was fitting on a night when the Raiders remembered their legendary coach John Madden on the anniversary of their first Super Bowl victory.

They just won and now they get a chance to play on.