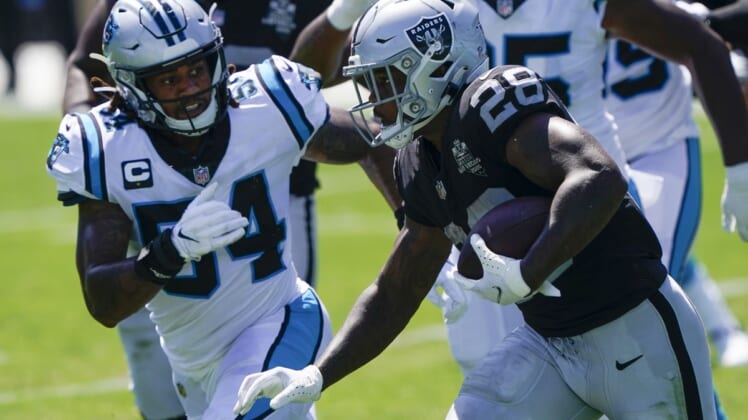 While many in Raider Nation weren’t completely satisfied with a Raiders win in Carolina on Sunday, leaving Charlotte with the 34-30 victory is by far the most important takeaway for the team.

In his post-game press conference after the Las Vegas Raiders win in Charlotte on Sunday, head coach Jon Gruden knew it wasn’t pretty but he also was proud his young core group came up big when it mattered the most.

“Today was a very sloppy performance on the defense’s part,” Gruden said. “We got to go out and execute a way lot more than we did. We gave up a few big plays, and if you give up big plays in this league, you get beat. We were fortunate enough to come away with a ‘W’ today, but overall we did what we needed to do to get the win.”

It was a win very special to the coach. It was the first as the Las Vegas Raiders.

Although the Raiders win the game, there were troubling signs the team’s young defense has a long way to go to be at a level for this team to take the next step it must in the coach’s third year rebuilding the roster. Still, Gruden saw his defense struggle but also saw them come up huge when it mattered most.

“(It’s big) especially when you have a 12-point lead and you get your guts taken out with blown coverage and they take the lead on you,” Gruden said. “I’m really proud of our team. A great win for us.”

Although everyone in the world thought the ball would go to McCaffery, Ferrell said the Raiders weren’t surprised by the play at all.

“They had run the play once before on the goal line,” Ferrell said. “It was just being ready. I guess they were trying to quick count us all game and were trying to surprise us with it. We just made the play.”

While Twtter GM’s were all ready to fire Raiders defensive coordinator Paul Guenther in the first half, Gruden said he was proud of his team for making the play but also of his friend and coach for making the adjustment under pressure.

“I’m really proud of Paul Guenther,” Gruden said. “You’re struggling, you’re trying to find the right call, we had a big pass interference penalty, we’ve got blown coverage, we lost the lead. I thought he kept his poise. He got us in the right call and the players won the one-on-one. That’s what Raiders football is all about.”

Still, the problems on defense were numerous. On the backend, you expected the Raiders young cornerbacks and safety to take some time to settle in. It will be an up-and-down season (especially early) for the unit that is talented but inexperienced. That inexperience was evident on a 75-yard touchdown strike from Teddy Bridgewater to Robby Anderson. Veteran safety Erik Harris misplayed the ball leading to the score which gave the Panthers 30-27 lead with 8:28 remaining in the game.

Add in a late pass interference call on rookie Damon Arnette, and some overall coverage recognition issues, that unit’s first showing was a mixed bag.

That pressure on the secondary was exacerbated by the Raiders inability to pressure Bridgewater upfront. With the addition of EDGE Carl Nassib (.5 sack, 2 QB hurries), and DT Maliek Collins, the team’s pass rush was expected to improve greatly heading into 2020.

Yet, against Carolina, the Raiders front only mustered one sack and three quarterback hurries. Some credit has to be given to Bridgewater but the Raiders win did expose the need for better play up front heading into the team’s home debut agains the high-powered New Orleans Saints.

“It was a hard fought battle,” Ferrell said. “The defense did not play like we feel we need to play. At the end of the day, when the game was on the line, you have to block all that out line up and go.”

Ferrell’s comment is important. It shows this group understands it didn’t play well but it did come up big when the team needed them to. Now it’s time to build on that, build consistency and get better – and fast.

The Raiders win on the road is a big one. It was a game, in my view, they had to win. The early part of the schedule is tough and building confidence among their defensive unit is key to a better 2020. The defense has to get markedly better in all facets of the game leading into their Nevada debut in Week 2 against future Hall of Famer Drew Brees.

The team also has to contend with a possible loss of big offseason acquisition Nick Kwiatkoski. He left in the second quarter with a pectoral injury. The extent of the injury is unknown and his loss for an extended period of time could be bad news. Luckily, Raiders GM Mike Mayock added Raekwon McMillian who filled in nicely. Depth is everything in the NFL.

Despite warts, a Raiders win is a Raiders win. There’s no such thing as an ugly win. While Gruden and his team have plenty to work on, especially on defense, they’re 1-0 and that’s the most important stat coming out of the Raiders win on Sunday.