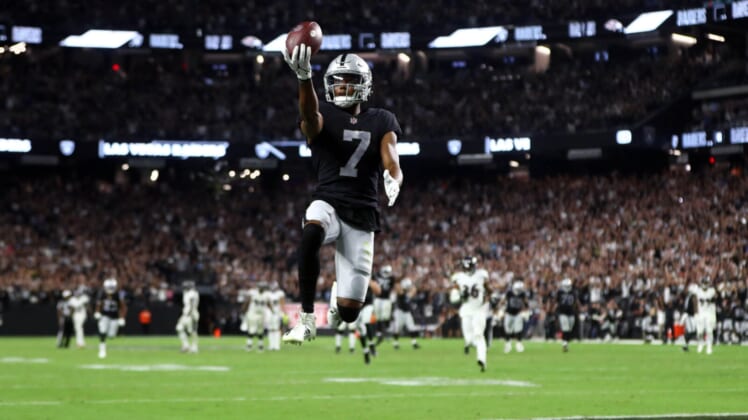 In just under a month, the Las Vegas Raiders have lost their head coach and top young wide receiver to controversy and tragedy. While both incidents are completely different, interim head coach Rich Bisaccia talked the differences and how his team must — yet again — adapt and overcome. That includes now finding another Raiders wide receiver option.

“Two totally separate entities,” interim head coach Rich Bisaccia told the media Wednesday afternoon. “I felt like we moved on from what happened before, and we had the chance to play two games. Now, we’ve been confronted with this situation.

“As grown men, we all have to respond in a certain way. We’re all forging our identity in life and certainly in the locker room through how we face adversity and how we deal with adversity.”

On Wednesday, a prosecutor said Ruggs reached speeds higher than 150 miles per hour with a blood-alcohol level twice Nevada’s legal limit minutes before the accident, killing a 23-year-old woman and her dog.

Now, Bisaccia, General Manager Mike Mayock, offensive coordinator Greg Olson and wide receivers coach Edgar Bennett have to figure out how to fill in the void with Ruggs out ahead of their Week 9 matchup on the road against the New York Giants.

Here are three options for the Raiders wide receiver replacement:

Once the regular season began, he continued to accumulate receptions from quarterback Derek Carr.

Behind Ruggs on the depth chart was Jones, who caught the game-winning, walk-off touchdown in overtime against the Baltimore Ravens to begin the season. In the five games Jones has seen action on offense this year, the 6-foot-2 receiver has at least one catch in each of those games and only has one drop across seven targets.

Two weeks ago, Jones’ lone catch came on the team’s first drive against the Philadelphia Eagles.

“Zay’s made a lot of plays in the games we’ve played in, and people don’t even notice what he’s done playing flyer on the punt team and he’s on kickoff return,” Bisaccia said.

This year, Jones has played in a minimum of six special teams snaps, which happened both at Pittsburgh and in Los Angeles against the Chargers. Through the team’s first seven games, Ruggs averaged five targets per game and saw a season-high seven targets in weeks two and three.

With Ruggs out of the picture, Jones could easily see his targets increase to at least five per game as the season rolls on and become the Raiders wide receiver replacement for Ruggs on a permanent basis.

In Week one, tight end Darren Waller had 19 targets. Since then, the most the 6-foot-6 tight end has seen in a game is eight, which came against Chicago. Ok, he might not technically be a Raiders wide receiver, but he certainly can play that role and play it well.

Carr said Waller’s personality allows him not to complain about how much volume he gets from one week to the next.

“Our superstar player, our tight end, is our most selfless player on our team,” Carr said of Waller. “When your best player is your most selfless player, everyone has to fall in line. ‘Who can argue about not getting targets if his targets go from 20 to four one day?’ He’s the biggest cheerleader on the sidelines the game he’s not playing.”

Two weeks ago, Waller was sidelined with an ankle injury against the Eagles.

Behind Waller on the tight end depth chart is Foster Moreau, who is more of a blocking tight end.

However, the 24-year-old Moreau responded by recording six receptions on six targets for 60 yards and a touchdown for his second score of the season.

Adding Moreau and Jones to an increased role in the passing game would pay dividends as both have catch percentages higher than 80%, but neither have reached a minimum of 15 targets yet this season.

“We had this conversation a week ago,” Bisaccia said. “Darren Waller didn’t play. The only people surprised that Foster did what he did, I guess, was the media because certainly no one in the locker room was surprised what Foster did. So, we have a high expectation for what Zay can bring us just like what he’s brought us up until this point.”

One of the struggles this season for Las Vegas has been the running game, especially when Josh Jacobs has not been 100% healthy and the offensive line have been finding its bearings.

However, running back Kenyan Drake, who the team signed to a two-year deal during the offseason, has stepped up. Always a good receiving back, Drake may now be a de-facto Raiders wide receiver in certain sets.

But in the next two games, Drake got three rushes for 13 yards, saw just one targets and was used more in the kick return game.

However, in the Raiders last two games – when Olson took over the offense – Drake’s rushing and receiving numbers started to get back to where they were earlier in the year.

Against Denver three weeks ago, the 27-year-old totaled four rushes for 34 yards and a touchdown. He also caught two passes on two targets for 39 yards and another touchdown in a 34-24 win in the Mile High City.

Although it might seem like Drake saw low volume against Denver, Drake took advantage of those opportunities as he posted 8.5 yards per rushing attempt and 19.5 yards per catch, which were both season-highs.

Last game, Drake recorded 14 rushing attempts for 69 yards, which were both season-highs, despite Jacobs going down with a chest injury. Drake scored a rushing touchdown and added three catches on three targets for 10 yards.

If Jacobs is healthy, it can be possible for both him and Drake to be in on the same plays as Drake recorded at least one catch in 13 of 15 games he saw action in last year with the Arizona Cardinals.

In addition, Bisaccia said Jacobs – and Waller – were both full participants in practice today.

“We’re clean today. I was really fired up about that,” Bisaccia said.

Bisaccia said neither will be brought up for Sunday’s game but could in weeks to come.

“We’ve had conversations and we have Stoner and Wims and there’s conversations about others as well,” Bisaccia said. “We’re probably going to stay status quo this week and we know we have a chance to possibly move Stoner up. We have Wims that has done a good job, but it is between those two.”