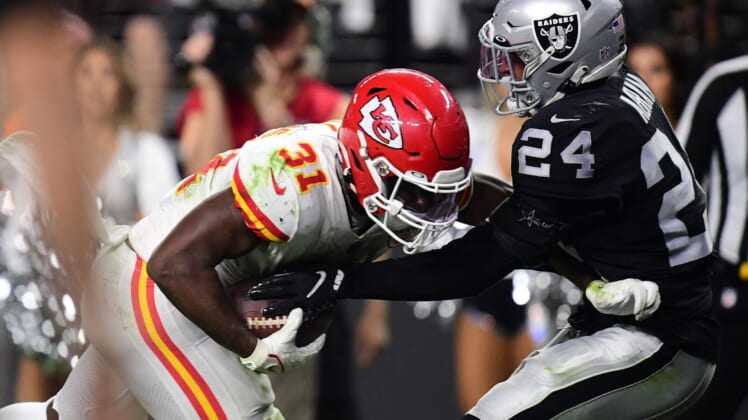 You cannot sugarcoat the Las Vegas Raiders and their lackluster performance in any form or fashion. Every game has its positives and negatives, but in the big picture, Las Vegas failed miserably with the top spot in the AFC West at stake.

In the biggest game of their season at home, the Raiders took a 41-14 loss to the Kansas City Chiefs. While we can distribute blame between the offense and defense, Vegas fell embarrassingly short in all three phases of the game.

The offense went 1-for-9 on third-down conversions. Quarterback Derek Carr led the team in rushing with 18 yards. He tossed up desperate heaves and took two sacks. The right side of the offensive line continues to struggle with pre-snap penalties.

…this team must use Sunday’s loss as a wake-up call rather than allow it to snowball into another disappointing finish to a season.

Yes, it was that bad.

Meanwhile, the Raiders had no answer for the Chiefs’ top-two playmakers in tight end Travis Kelce and wideout Tyreek Hill, who combined for 15 receptions, 202 yards and two touchdowns, or running back Darrel Williams, who caught nine passes for 101 yards and a touchdown.

The Chiefs tipped a punt and converted a first down on a fake punt, which probably makes interim head coach Rich Bisaccia’s stomach turn because of his background as a special teams coordinator.

Sure, wide receiver DeSean Jackson made a terrible mistake when he tried to evade a defender and fumbled inside the Chiefs’ 20-yard line. Safety Johnathan Abram didn’t attack the ball in the air and allowed Williams to come down with a spectacular touchdown catch.

It all looked awful, but now what?

Raiders need to wake up before it’s too late

This week, reporters will pepper Raiders coaches and players with questions about avoiding another second-half season collapse. Though it may irritate them, this team must use Sunday’s loss as a wake-up call rather than allow it to snowball into another disappointing finish to a season.

This year, the Raiders have gone through a lot with the resignation of head coach Jon Gruden and wideout Henry Ruggs’ tragic car crash that resulted in the death of Tina Tintor and her dog.

With that said, those unfortunate turn of events aren’t excuses for the Raiders defense putting together its worse performance Sunday. Up until the previous outing, Vegas fielded a top-five pass defense. Quarterback Patrick Mahomes shredded the unit for 406 yards and five touchdowns.

On top of that, over the last three years, the Raiders have used a first- and a second-round pick on safeties and signed Pro Bowl linebacker Cory Littleton, but collectively or individually, none of those players could slow down Kelce.

While rookie safety Tre’von Moehrig should improve with time, what’s the point of using premium draft capital and investing big money into free agents if they’re not capable of countering the playmakers of a division rival? That’s not an issue connected to off-the-field matters. Abram is a limited safety who’s still not performing at the level of a first-round talent and Littleton hasn’t played up to his contract.

The Raiders went into Sunday’s game tied for 10th in penalties and ranked eighth in penalized yards. On Sunday, they committed nine infractions for 68 yards. This isn’t a new issue that popped up after some in-season hardships—their undisciplined play has been a perpetual issue.

Lastly, we have to stop pretending Carr and Zay Jones will magically hop on the same page and build a consistent rapport. They’ve played together for three seasons, and the wideout averages 1.2 catches per game with the Silver and Black.

Jones hasn’t played with star receivers while suiting up for the Silver and Black. He’s had opportunities to carve out a bigger role. Typically, the fifth-year veteran wideout produces one big catch per contest but then disappears for the other 59 or so minutes. Again, his minimal contributions have nothing to do with what’s gone on away from the field. For whatever reason, he’s been almost nonexistent in the passing attack for most of three terms.

Looking ahead, the Raiders must use the Chiefs’ loss as a kick in the butt. Some fans may look at that embarrassing defeat as a sign of emotional burdens weighing on their minds, but some of the shortcomings, as noted above, plagued them before Gruden resigned or Ruggs’ involvement in a tragic accident.

Last week, the Raiders could’ve beaten the New York Giants if they took advantage of opportunities inside the red zone. On Sunday, they lost in the coaching battle and individual matchups on the field, which resulted in their worst loss of the campaign.

The Chiefs knocked the Raiders out TKO-style at Allegiant Stadium. Now, they’ll either get up off the mat, splash some water on their faces and battle back with eight scheduled games left or let a two-game skid turn into a meltdown. Regardless of what the Raiders have gone through, their next opponent isn’t going to ease up on them. They must prepare to compete with positions and jobs on the line.