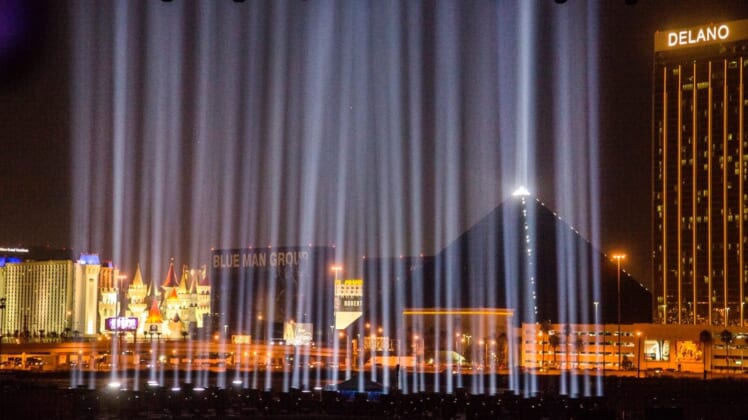 The sparkling groundbreaking of the new Las Vegas Stadium – the future home of the Las Vegas Raiders – paid tribute to a city and a community ready for the NFL.

They said it would never happen. Las Vegas wasn’t an NFL city and the Oakland Raiders certainly wouldn’t move to a place more well known for vice than nice.

The shovels hit the ground the the Raiders new stadium in Las Vegas is officially under construction.

Yet, here we stood – 1,000 invited guests sitting just across from the famed Las Vegas Strip as ceremonial shovels turned dirt and dignitaries espoused the greatness of the future of a city from a podium adorned with the iconic Raiders shield. Wayne Newton, Carlos Santana, and George Lopez all front and center. All of this just several decades removed from Las Vegas being a small, dusty, sparsely-populated gambling town.

The Raiders organization and Las Vegas shined on one of the biggest moments in the city’s 106-year history. The argument on funding a stadium, luring an NFL team, and making it happen legislatively long over, the night was one to celebrate and to remember the resilience and “get it done” attitude that helped Nevada land football’s most historic brand.

“Nevada is the ‘get it done’ state and that’s what we did here,” Nevada’s Governor Brian Sandoval said. “The moment Mark (Davis) and I met, we both looked each other in the eye and made a pledge that we would be upfront with one another and get this thing done. He said he would get the Raiders to Las Vegas if we could. And tonight, it’s finally becoming a reality.”

The Raiders started the evening with the House of Blues Gospel Brunch Choir singing a rousing rendition of “Rise Up” – remembering the victims of the city’s most horrific moments on October 1st of this year. First responders were present and paraded through the crowd during the song reminding folks that football greats weren’t the only heroes in the house. Yet the song, and the Raiders correct read on leading first with the community and its resilience, were the perfect choice no matter which way you looked at it.

The beautiful backdrop for the event shows off the view from the future stadium looking northeast.

“The resilience and strength of this community was clear over the past few weeks and that makes us all proud,” said Clark County Commission Chairman (and our future Governor) Steve Sisolak. “Now we move forward and welcome the Raiders to our community. They have already become part of our community and this moment is one we will all remember as a defining moment for our city and our state.”

Raiders President Marc Badain, the point-person for the Raiders in making the move to Las Vegas a reality, looked like a relieved man most of the evening. The emotion raw, and the first part of the journey coming to a close, Badain and his decades long efforts were finally coming to fruition.

“When you join the Raiders organization, the first thing you learn about is loyalty and commitment,” Badain said. “It pays off for all of us on a night like this. For the first time in our history, we have our own home. We have an amazing and storied legacy in Oakland, but our future is in Las Vegas and we’re looking forward to calling it home.”

As someone who calls Las Vegas home, the night was a surreal affair. Thinking back to when parts of our family came to Las Vegas in 1961, or when I, myself, moved here in 1992, sitting in that tent on the stadium site was truly remarkable. Las Vegas is going to be an NFL city and it feels great. Our city is most often misunderstood. But outside the vice and vacation economy lies a real community growing in diversity and size. This validation feels good and it was nice to see this event start to celebrate our community putting on its big boy pants.

Local 872’s Tommy White and his members were a popular group at the event.

Also awe inspiring was the inclusion of the working men and women who will build this modern marvel. The Laborers Local 872 provided the hoots and hollers all evening with even NFL Commissioner Roger Goodell giving them a shout-out. The scope of the project, and the number of families who will have work and income because of it cannot be understated. No one builds like Las Vegas and these hardworking Las Vegans are going to build a legacy unlike any other. They’ve built our infrastructure and our sparking hotels and resorts. Now they get to build the most impressive stadium in all of sports.

“Now it’s time to build and get our people to work,” said Tommy White, Business Manager of Local 872. “What this means to working families in Las Vegas is beyond description. After lots of challenges, we can get people to work and build something this city will be proud of.”

It was truly a great night to be a Las Vegan and a Nevadan.

The fact of the matter is: we got it done. Now it’s time to build. And build we will.