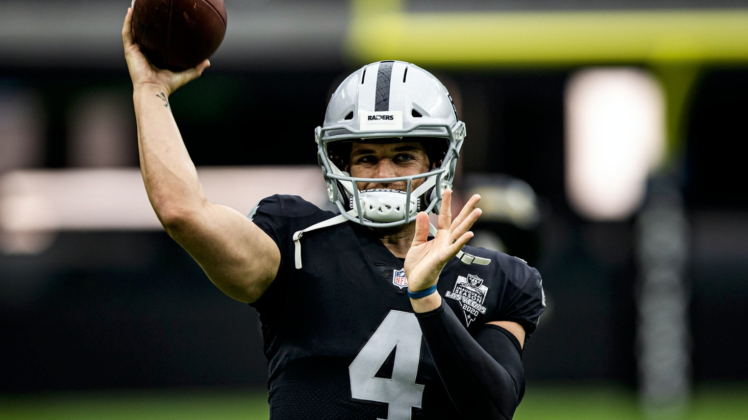 As part of Friday’s scrimmage at the new Allegiant Stadium, the commemorative uniform patch was unveiled thanks to Derek Carr and then on the field.

Just before the Las Vegas Raiders ran onto the field at inside Allegiant Stadium on Friday, Derek Carr shared some photos from the new ultra-luxurious team’s locker room and also lifted the lid on a surprise – the Raiders uniform patch to commemorate their first season in Las Vegas and the state of Nevada.

The patch includes the outlines of the State of Nevada, includes imagery of Allegiant Stadium, the iconic Raiders shield, and the Welcome to Fabulous Las Vegas sign in the geographic location of Las Vegas.

Season ticket holders also received one of the patches in their epic Allegiant Stadium-boxed packages that were also sent out Friday. The illuminated season ticket box included the patch, season tickets, and other commemorative memorabilia. Read how the kits are fetching over $1,000 already on eBay.

It’s the second-straight year the Raiders uniform has sported a patch. Last year, the team’s final in Oakland, included a 60th-anniversary patch. despite the muted impact COVID-19 has had on the Raiders first season in their new home, several commemorations will move forward as planned while others have been scrapped and delayed until next year, according to sources from within the Raiders organization.

According to SportsLogo.net, it marks the 10th time since 1984 the Raiders have worn a special commemorative patch. The Raiders uniform patch history can be seen below in an image created by the site.

The Raiders.com shop has not begun selling the patches yet. With the popularity of patches in the Raider Nation culture, the new Las Vegas-themed Raiders patch is sure to be a hot seller.