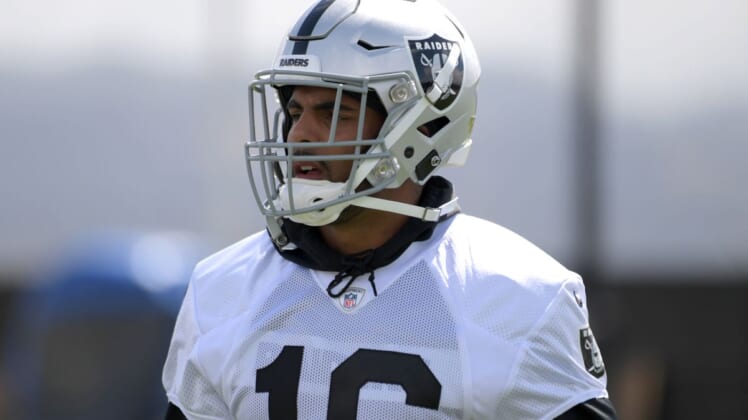 After the Las Vegas Raiders signed wide receiver Tyrell Williams away from the rival Los Angeles Chargers last season, much was expected of the veteran. But nagging foot ailments shortened his season – a problem he says is now in the past.

When Tyrell Williams suited up and played for the Raiders last season, there’s no doubt the offense was more complete. But a nagging battle with plantar fasciitis in both feet didn’t let the veteran wideout do what he wanted to.

The problems with his feet are in the past Williams said when meeting with the media Wednesday during the first full day of training camp at the Las Vegas Raiders new training facility in Henderson.

“It took a pretty long time into the offseason to finally start feeling better,” Tyrell Williams said. “With the virus and stuff I was able to even take more time which was really helpful.”

The only really good treatment for plantar fasciitis is rest and due to the lack of offseason workouts and minicamps, Williams had the extra time to rest, rehab, and get his feet to a point he feels he’s ready to be himself again.

“I don’t want to go back to that so yeah, I do a lot of daily maintenance stuff before and after practice to make sure that it doesn’t come back,” Williams said. “Just trying to find different ways to do things.”

Was it the rest? His new workout regimen that finally allowed him to move past the ailment?

“I don’t know what it was that finally got me over the hump, but I’ve tried a million different things and now I’m just starting to continue to add stuff, whatever feels good and however I can keep it that way into the next day and keep the soreness and all that stuff away,” Williams said.

His new-found health, coupled with a lack of distractions, has Tyrell Williams feeling good about himself and a wide receiver room that finds itself in a much better place than last season. The drama created by malcontent Antonio Brown is gone and he and his teammates are bonding in a way he feels makes a big difference.

“Last year, during it and going through it, it didn’t feel like a big distraction until now and how smooth and how easy it’s been. So, last year I think it definitely was a distraction,” Tyrell Williams said. “We tried not to let it be, but I think it did get to some of us and it was just kind of annoying for sure.

“And I think moving into this year and having the guys that we have, it’s just been super smooth. So far, it’s been awesome being around those guys and competition and how they like to approach every single day. Like we all push each other and, like I said earlier, we all are pretty close and all pretty good friends and it just makes it easy.”