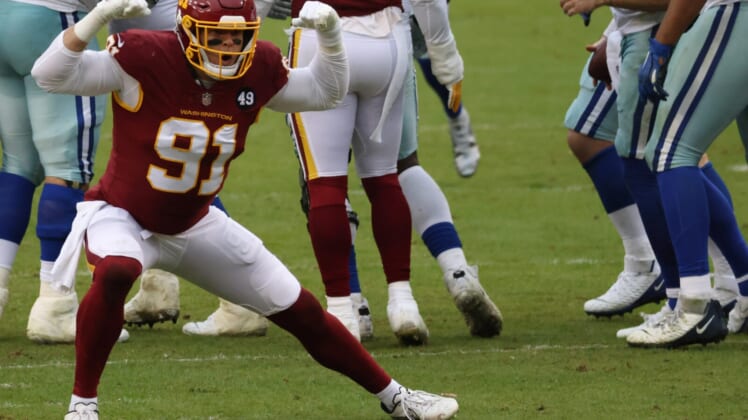 Coming up on the November 2nd NFL trade deadline, front-office executives will work the phones and assess the market. At 5-2, the Las Vegas Raiders should pursue players at two particular positions with an eye open for quality depth to help them sustain their momentum. While fans wait for some Raiders trade news, I’ll take a realistic approach to explore who’s available and what it might cost Las Vegas to make a move.

Raiders trade news: Mike Mayock has been willing to deal

Over the past three drafts, general manager Mike Mayock has shown he’s willing to make deals. Without now-former coach Jon Gruden’s influence on personnel decisions, the Raiders’ front-office executive can mold the roster through his vision.

If Mayock targets certain roster areas, he should undoubtedly look at offensive tackles and interior defensive linemen who can stop the run. Over the past few weeks, the Raiders have shuffled their offensive line, and they’re ranked 28th against ground attacks for the season.

Typically, rumors far outweigh any actual movement before the deadline, but we’ll go through three realistic trade candidates who can help the Silver and Black this year.

The Raiders have struggled to corral mobile quarterbacks who can break contain and running backs between the tackles this season. While the (hopeful) return of linebacker Nicholas Morrow could become instrumental in tracking down signal-callers outside the pocket, the unit needs another quality run defender.

The Raiders will see Ekeler again in the season finale. On the road, they’ll face the Cleveland Browns, Indianapolis Colts and Dallas Cowboys, three top-10 rushing teams that can play a physical style in the trenches. Mayock has to address the run defense with a free-agent acquisition or a trade.

Andrew Billings signed with the Browns during the 2020 offseason, but he hasn’t carved out a role in the rotation. Last season, the fifth-year pro exercised the COVID-19 opt-out option. Through the first eight weeks of this term, he’s played just 17 percent of the defensive snaps, logging one tackle.

On an expiring contract without a role, Billings doesn’t have a future in Cleveland. The Raiders can likely acquire him in exchange for a late-round pick. He could become a valuable run-stopper on the interior along with Johnathan Hankins.

As primarily a starter with the Cincinnati Bengals between the 2017 and 2019 campaigns, Billings recorded 81 tackles (49 solo), 14 for loss and 3.5 sacks. If you’re watching Raiders trade news closely the next few days, you shouldn’t be surprised if Billings is one of the names you hear.

The Raiders don’t have a strong need for another pass-rusher, but the defense can never have enough players capable of getting after the quarterback. That’s why Raiders trade news is sure to include speculation around another EDGE player.

Ideally, Melvin Ingram III would make sense, but according to NFL Network’s Aditi Kinkhabwala, the Pittsburgh Steelers don’t want to trade him to an AFC team. Per NFL Network’s Ian Rapoport, the 32-year-old wants a more consistent role, which he wouldn’t have in Las Vegas behind Maxx Crosby and Yannick Ngakoue.

If Crosby or Ngakoue go down with an injury, the Raiders cannot rely on Carl Nassib or Clelin Ferrell to pick up the pass-rushing slack on the edge with consistency. While the former has had some moments, he’s recorded just three tackles since Week 4. The latter has three tackles in six games.

Ryan Kerrigan isn’t a good fit with the Philadelphia Eagles. He’s logged one tackle while playing 33 percent of the snaps through seven games. The Raiders should offer a late-round pick for the 33-year-old pass-rushing specialist who’s recorded at least 5.5 sacks in each of his 10 seasons with the Washington Football Team. Remember, playoff contenders, need quality depth at premium positions.

Although the patchwork Las Vegas offensive line has played much better the past two weeks entering the bye, it would be a shock not to see offensive line targets as part of Raiders trade news this week.

In Week 5, the Raiders moved Alex Leatherwood from right tackle to right guard, showing improvement. The coaching staff should keep him inside to aid his growth and bolster the ground attack, but that creates an issue on the perimeter.

The Raiders need an upgrade at the position to make sure quarterback Derek Carr stays upright. Brandon Parker replaced Leatherwood at right tackle, and he’s allowed 10 quarterback pressures since he took over the starting role, per Pro Football Focus (subscription required). The 2018 third-rounder hasn’t proven himself as anything more than a decent swing tackle in short stretches.

Mayock should check in on Dennis Kelly, who’s yet to play a snap for the Green Bay Packers this season. With two-time All-Pro tackle David Bakhtiari close to a return, Elgton Jenkins’ ability to play multiple spots along the offensive line and Billy Turner currently entrenched as the starting right tackle, the Packers may deal Kelly for the right price.

In exchange for a late-round pick, the Raiders can land a battle-tested right tackle who played 1,099 snaps and didn’t allow a sack through the 2020 campaign, per PFF. At 6’8″, 321 pounds, Kelly can seal the edge in pass protection, create outside running lanes and go downhill while blocking for screens.

Does Raiders trade news mean a move is imminent?

The Raiders trade news you may hear could be your typical rumor mill, or Mayock may pull the trigger to help his AFC West-leading team get better at the weak spots. Success in the NFL can be fleeting and depth is a key ingredient to building a winning team. Whether or not we see many Raiders trade news mentions, or just speculation or rumors, is yet to be seen. Yet don’t be surprised if the next few days include moves to take advantage of the team’s position in the AFC playoff hunt.