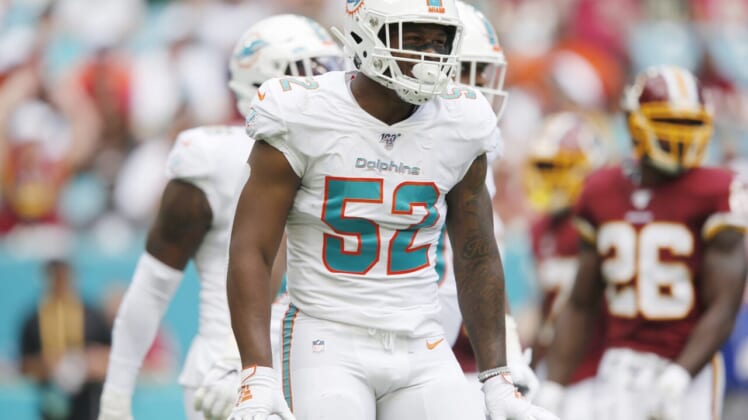 Las Vegas Raiders training camp clearly yielded an additional need for help at the position as the team adds depth and experience in its rebuilt linebacking corps.

The Las Vegas Raiders are reportedly finalizing a trade that will send a 2021 fourth-round draft pick to the Miami Dolphins for linebacker Raekwon McMillan. The Raiders trade draft pick to help solidify a position they’ve spent significant time, money and draft capital on already this year.

McMillan was a second-round pick of the Dolphins in 2017 and was Miami’s starting middle linebacker in 2019 starting in 13 games before he was hampered by a hamstring injury.

McMillan’s rookie contract was for four-years at $4.69 million with $3.16 million guaranteed.

There was a sense young linebackers Tanner Muse and undrafted free agent Javin White weren’t quite ready for primetime. Both have shown flashes but with the season just over a week away, and the Raiders coach Jon Gruden having to make tough roster choices before next week’s roster trim, the move makes great sense.

“Our young draft choices, a couple of them, have taken steps forward,” Gruden said after the team’s final training camp practice at Allegiant Stadium on Friday. “A couple of them we are still waiting on, but we are getting better and I’m proud of the way our guys are working together on the practice field every day.”