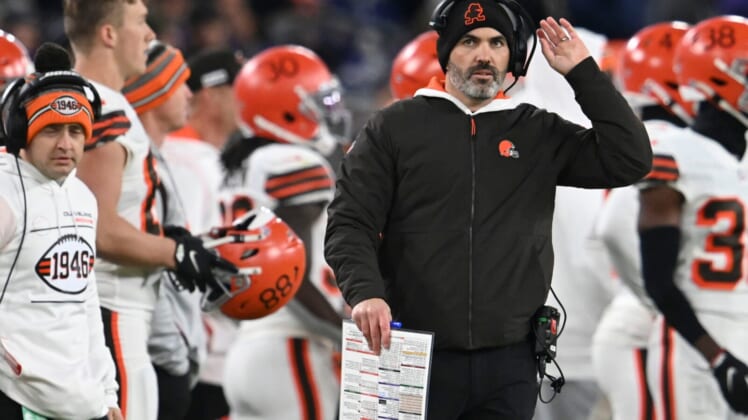 In the next few days, we’re going to hear about how the Las Vegas Raiders should beat the Cleveland Browns, who will likely go into Saturday’s matchup shorthanded because of a COVID-19 outbreak.

Wyche’s tweet resonates with a portion of the Raiders fanbase and plenty of NFL fans who took note of big-name players on the Browns’ reserve/COVID list, which reached 18 players, primarily starters or key rotational contributors.

However, the Raiders still face a formidable opponent Saturday even without those players and head coach Kevin Stefanski, who tested positive.

First and foremost, the weather conditions in Cleveland will change even the playing field and shorten the game. A recent preview of the game in the Las Vegas Review-Journal highlighted the forecast.

Don’t expect either team to throw for a ton of yards in frosty temperatures with precipitation. On top of that, the top pass-catchers for both clubs may sit out. The Browns placed Landry on the reserve/COVID list Tuesday, and tight end Darren Waller has yet to practice with the Raiders this week.

As a result, the better ground attack and defense will win this contest, which simplifies this battle down to a probable low-scoring slugfest. The winning team may need 21 points, and Vegas has failed to score 17 points in five of its last six games—three of those outings in a dome at Allegiant Stadium.

Raiders struggle to run the ball and stop the run

Vegas fields the 29th-ranked rushing offense, and Cleveland still has its top two defensive linemen in Myles Garrett and Jadeveon Clowney, who have recorded a combined 24 tackles for loss.

The Raiders aren’t equipped to play a physical brand of football because of their poor run blocking. When you add Garrett and Clowney to the mix, running back Josh Jacobs may find it even more challenging to move the ball on the ground.

Laugh all you want about Mullens, but he may not have to do much with running backs Nick Chubb and D’Ernest Johnson healthy.

Nick Chubb ranks fifth in rushing (926) behind an offensive line that battled injuries this season, specifically at tackle. Wills has already missed two games on the left side, and on the right side, Jack Conklin missed six contests before going on injured reserve with a torn patella tendon.

Johnson, who’s primed to fill in for Hunt, mowed through the Denver Broncos’ 10th-ranked run defense in Week 7 for a career-high 146 yards and a touchdown. While the rain or snow may slow him down a bit, the Raiders field one of the league’s worst run defenses, which ranks 26th in rushing yards allowed.

The Raiders don’t match up well against the Browns in lousy weather in terms of strengths and weaknesses. The club that imposes its will in a physical Saturday showdown will walk off out of FirstEnergy Stadium with a victory.

The Raiders have relied on their second-ranked passing attack through most of the campaign, which sputtered after the team waived Henry Ruggs III and Waller suffered knee and back injuries.

With those key losses (assuming Waller sits out) combined with possible precipitation, quarterback Derek Carr won’t be able to take advantage of the Browns’ backups in the secondary. Hunter Renfrow can only do but so much out of the slot. DeSean Jackson has seen just three targets in the last two games and looks like a non-factor for this contest.

Before anyone tells you that the Raiders should beat the Browns, look at how these teams match up on the field. Cleveland is built for these conditions against a downward-spiraling squad that lost its physical identity this year.