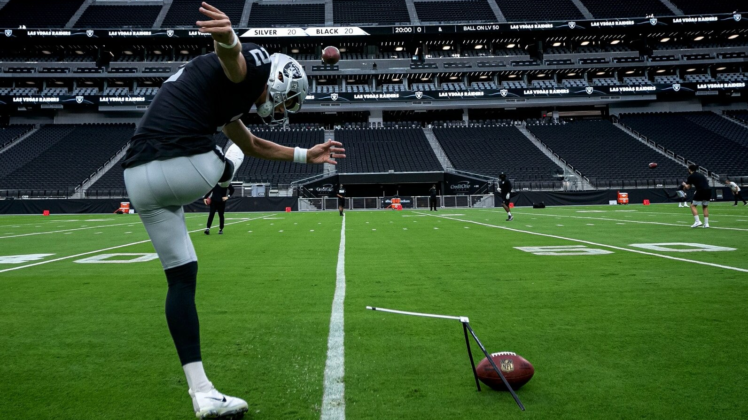 The Las Vegas Raiders special teams has now had two chances to practice inside the team’s new home – Allegiant Stadium. For the specialized unit, does playing indoors change your game preparation?

Raiders special teams coach Rich Bisaccia says not so much.

Meeting with the media on Monday, Bisaccia said the chance for his Raiders special teams unit to get some workouts in the stadium was helpful, but it doesn’t change the way they prepare.

“I’ve been around a long time and the stadium is absolutely incredible,” Bisaccia said. “It will be interesting to see when they open the one end zone (north lanai doors) and what that looks like.”

Although a dome makes weather conditions a moot point, Bisaccia did say allowing the players to get in there and work before the first regular season home game against the Saints on September 21st was good for his team.

“Coach Gruden did a good job getting us over there twice,” Bisaccia said. “That got us acclimated in the new facility and we got the looking around part out of the way.”

As has been the Raiders custom this offseason, not a lot of detail about preparation but Bisaccia doesn’t seem to believe preparation will be any different.

The biggest adjustment could be for the kick return and punt return specialist. With the roof and new visual background, it could take some adjusting too but the veteran coach doesn’t seem to concerned so far.

And while the Raiders special teams unit doesn’t get the attention of the offense or defense, in a very competitive AFC West, with a young team on both sides of the ball, it could be a difference maker in 2020.