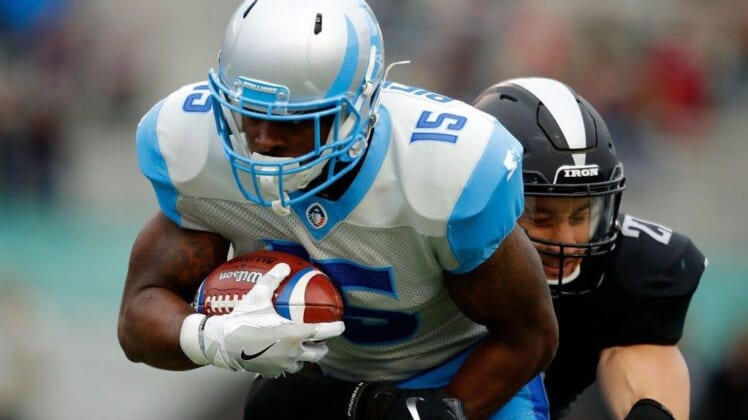 While the Alliance of American Football League didn’t even last a complete season, one of its standout wide receivers signs with Oakland; team announces the release of Saeed Blacknall.

The Raiders announced today the signing of free agent wide receiver De’Mornay Pierson-El . Pierson-El, who played collegiately at Nebraska, last played with the Salt Lake Stallions of the now-defunct league. The Raiders had signed and then released Pierson-El back in April.

The 5-foot-9, 195-pound wide receiver grabbed 36 catches for 414 yards (11.5 avg.) and one touchdown in eight games with Salt Lake. Pierson-El was the team’s top receiver in both categories.

Pierson-El had a productive career at Nebraska where he started off as a 2014 All-American punt returner as a true freshman. He finished his college career and was signed last season by the Washington Redskins as an undrafted free agent. He also had a brief stint with the Montreal Alouettes of the Canadian Football League.

Pierson-El’s best year in college was in 2017 as a junior when he caught 69 passes for 874 yards and a touchdown. His senior season he caught just 14 balls for 210 yards and four touchdowns. In four seasons at Nebraska, he finished with 100 receptions for 1,309 yards and 11 touchdowns in 43 games.

Blacknall spent most of 2018 on the Raiders practice squad.