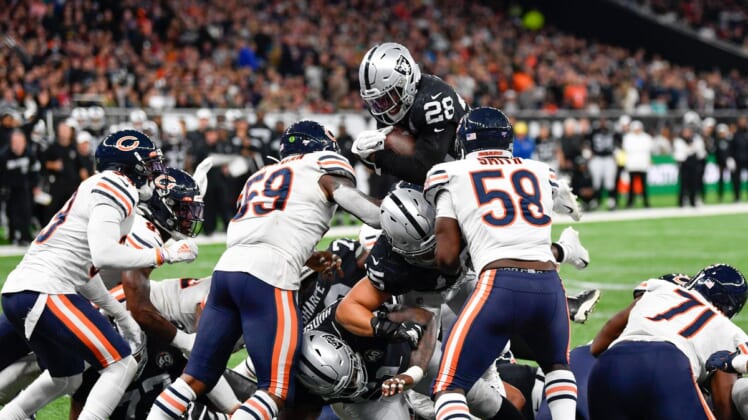 In a possible season-defining performance, the Raiders dominant line of scrimmage and win their biggest game of the young season.

This column originally appeared on CBSSportsRadio1140.Radio.Com

It was ugly most of the second half, but the Oakland Raiders showed resilience in a come-from-behind 24-21 win over the Chicago Bears at Tottenham Hotspur Stadium in London on Sunday night.

The Raiders dominated the first half jumping out to 17-0 lead at halftime thanks to the strong running of rookie running back Josh Jacob who amassed 123 yards on 26 carries, including the game-winning touchdown with 1:57 left.

After the go-ahead score, the Bears mounted one final drive but were thwarted when Raiders cornerback Gareon Conley intercepted a wayward Chase Daniel pass sealing the victory and moving the team to 3-2 on the season.

For the Raiders, it was another big win in the long stretch of five games away from home this season. They were uneven, but very good at times, and did what they had to do in order to go back to Oakland for the bye week the winners of two in arrow.

Here are quick reactions to the Raiders London win:

Jacobs Was Always the Key

When we went on the air live in London on Sunday, all three of us on Silver and Black Today said Josh Jacobs would be the key for the Raiders to beat the vaunted Bears defense. Jacobs delivered with a stellar performance and the offensive line delivered gaping holes and running room for the former Alabama runner. With the strong defensive front, and the Raiders thin at wide receiver for the game, they needed weapons for quarterback Derek Carr – and the rookie delivered. His ability to run consistently, and the fact he can catch a good pass out of the backfield, worked nicely for Oakland. Jacobs caught just three passes for 20 yards but his presence was key to this Raiders win.

Raiders Defensive Backs Get It Done

As we noted in our preview of the game on Saturday, the matchup of Gareon Conley and Bears wideout Allen Robinson was a key to winning the game for Oakland. Conley had the big interception to dash the Bears hope late, but he did give and get. Robinson did have two spectacular touchdown passes against Conley but, in the end, Conley was in the right place at the right time. The Raiders played well upfront too pressuring Daniel just enough to disrupt the QB’s rhythm helping create the two interceptions. This unit played a pretty good game and shows progress each of the past two weeks.

Watching Carr (25-of-32, 239, 0 TDs, 0 INTS) for the first time live this season, he threw some darts and also left me perplexed. Continually the Raiders had receivers downfield open and but Carr chooses to check down to closer receivers. Carr has all the talent in the world but missing weapons like Tyrell Williams might have had him tentative to throw longer down the field. Either way, he did enough to win the game and lead his team back for the bye week on a winning streak. He played a good game and offensive playcalling isn’t his responsibility.

All is OK in the UK

The entire experience here in London has been top-notch and there are plenty (and growing) English fans of American football. Tottenham Hotspur Stadium is breathtaking and in-line with any major US stadium. It was a blast to be able to do our show here live back to Las Vegas. Thanks for listening and we’ll be back on Sunday!