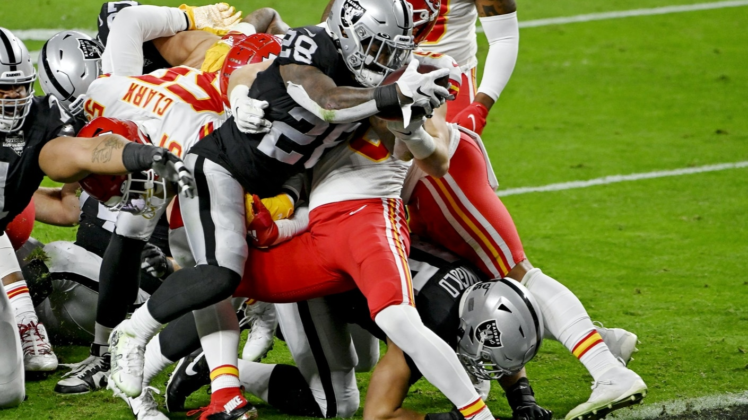 While the saying goes “there are no moral victories,” the Las Vegas Raiders 35-31 loss to the Kanas City Chiefs shows the team’s rebuilding process has reached a turning point in Year 3. While not all the way there yet, Jon Gruden’s team is closer to the goal and that’s a good sign.

While the COVID-19 pandemic has forced media and coaches to only communicate through Zoom and video conferencing, it was easy to see and feel how disappointed and upset Raiders coach Jon Gruden was with Sunday night’s 35-31 loss to the Kansas City Chiefs at Allegiant Stadium in Las Vegas.

You couldn’t see the coach’s mouth, expressions or even his eyes as he met with the media, but you could feel is profound disappointment.

“I don’t know, this is hard to swallow right now,” Gruden said after the loss when asked about where his team is at now at 6-4. “I don’t have anything to say about that. I don’t know where we rank. We’re giving great effort. We have to get some people back out on the field playing, and hopefully, we can. We have six or seven more weeks guaranteed to us and hopefully, we can take advantage of it.”

While it’s understandable why Gruden was so visibly upset, his team could have, and perhaps should have, won the game. Beset by big drops by primary receivers all night, the Raiders couldn’t capitalize on key offensive possessions and allowed Kansas City too many long drives on offense. The Chiefs held the ball 32:05 to the Raiders 27:55 and were able to set a new team record for 36 first downs in the game. They executed exactly the gameplan the Raiders needed. It was ball control, long drives, and all of them ending in touchdowns.

Despite that, the resilient Raiders offense went toe-to-toe with the NFL’s golden boy in Patrick Mahomes and the Chiefs for the second time in 2020. Derek Carr was near perfect the entire night finishing the game 23-of-31 for 275 yards, three touchdowns, and one interception. Carr simply was in command of the offense all night long. He willed the Raiders into scoring position time and time again and would have scored more perhaps if not for key drops by Nelson Agholor (twice) and Alec Ingold (twice). Carr was on the big stage of Sunday Night Football and was dazzling. His teammates let him down but that’s part of a team game sometimes.

When asked about the key drops on the night, Carr talked about how he deals with it.

“I’ve missed a lot of passes in my life. I try to react the same way I would want them to react to me. If it’s challenge them, then I’ll challenge them. If it’s pick them up, then pick them up. You try to read their demeanor and all those things. That’s why you have relationships with the guys and you understand what makes them click, what they like to hear in certain situations.”

Still, even with the chips down, Carr drove the Raiders down the field on a methodical 12-play, 75-yard drive that culminated in a five-yard touchdown pass to veteran tight end Jason Witten with just 1:43 remaining in the game. It gave the Raiders a 31-28 lead but it also gave Mahomes and the Chiefs time to matriculate a drive of their own.

Mahomes and coach Andy Reid used the time to engineer a game-winning touchdown drive ending in a 22-yard touchdown pass to Chiefs tight end Travis Kelce. Kelce, who ran over the middle unmolested, was free due to a blown coverage by Raiders safety Johnathan Abram.

Despite the continued issues with a Raiders defense that had been much better the past three weeks, Las Vegas did show a national television audience they are for real and a playoff contender – a dangerous one at that come January.

While the Raiders locker room was certainly disappointed after the late loss, the brass in the front office and Gruden himself can sense this team is getting closer to being a contender in the AFC. Having vanquished the Chiefs in Week 5, the Raiders were close to the sweep – they just couldn’t close out the talented Mahomes and the Chiefs.

“The exciting part is that everybody is young, we got a lot of young guys. I’m the old guy, I guess, in the group. It’s exciting because you see where we’re headed, it’s showing you a little glimpse here,” Carr said of the pride he had in his team and where it’s headed. “We’re starting to get a little healthier. We’re on our way, and it’s exciting, right? So, to answer your question, I’m excited, but today wasn’t enough.”

Championship teams close out games like this. Championship teams make plays when the game is on the line. The Raiders can do it, and will, they just need more time and perhaps some help. But no one on the Raiders sideline nor the fans of Raider Nation should feel distraught over the loss.

The Raiders aren’t a complete team yet but they are getting closer. They are young and light on the defensive side of the ball and that should be addressed in the upcoming NFL Draft. They have to learn to make plays when it matters the most. They will learn in big games championship teams and players make plays. They make the pass deflection, they make the key reception, and they put away their opponent at home.

Yes, there are no moral victories in the NFL. Success for the Raiders is to be judged simply on wins and losses. Yet this team is getting closer. After nearly two decades of subpar teams, seasons, and players, the Raiders are building it the right way and we’re seeing clear signs of it in 2020 despite the odd season it’s been.

The road to success is long and arduous. The Raiders still have a ways to go down that road but it’s getting shorter. The finish line is getting closer and for that Jon Gruden can rest easy knowing the plan is working.

It’s just not complete yet.