Raiders Shine in 24-16 Win over Denver 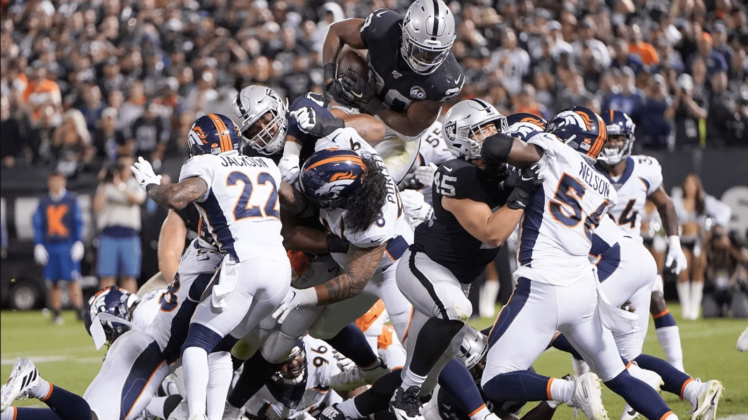 After a week of drama and betrayal on the field, Oakland gets big night from its defense, its quarterback Derek Carr and rookie running back Josh Jacobs

The Raiders have always played their most inspired football with their backs against the wall in the proverbial “us against the world” mode.

After their presumptive star receiver betrayed them and signed with arch-rival New England, the young squad took out their anger on the Denver Broncos on Monday Night Football in a rousing 24-16 win.

Led by a stifling and swarming defense, the Raiders held the Broncos and new quarterback Joe Flacco to just one touchdown en route to their first win in what will be their last season in Oakland.

The Raiders saw production and a pass rush many in Raider Nation could have only dreamed of last year. Having only compiled 13 sacks in total for the 2018 season, against the Broncos, the revamped Oakland defense notched three – including two by free-agent acquisition Benson Mayowa and one by 2019 first-round draft pick Clelin Ferrel.

Although the unit gave up 344 yards – with a large number of them on the final two drives – after cornerback Gareon Conley left the game with what appeared to be a neck injury. Reports indicate his injury is not serious despite Conley being carted off the field. That injury allowed Flacco to pick on rookie cornerback Trayvon Mullen, who mostly held his own.

Not to be lost in the excellent performance on defense, was the almost perfect performance of quarterback Derek Carr and a record-tying game by rookie running back Josh Jacobs.

Carr had only four incompletions on the night finishing 22-of-26 for 259 yards and one touchdown.

“He did a lot more for our team than just complete passes,” coach Jon Gruden said of his franchise quarterback. “He made some great audibles, he protected the ball, he was inspiring and leading the team on the sideline. I thought he was really good.”

The Raiders were phenomenal on third down converting on 10-of-14.

Tyrell Williams, who replaces Antonio Brown as the team’s top wideout, also had a sparkling debut. Williams had six receptions for 105 yards and one touchdown in his Raiders debut.

Alabama rookie running back Jacobs also made a statement in his first NFL game. Jacobs finished with 85 yards on 23 carries and two touchdowns. Jacobs also had one reception for 28 yards making him the first player since LaDanian Tomlinson with 100 yards and two rushing touchdowns in their NFL debut since 2001.

“The play that really impressed me was the catch and run,” Gruden said.
“That showed some all-purposeness (sic) liked we talked about. He can catch it. He can obviously run it and he picked up a couple of blitzes. He’s smart and passionate about the game.”

Gruden credited the Raiders game plan for helping lead his team to victory. The effective use of the run with Jacobs, combined with Carr’s accuracy and ability to create second chances, was a key component in the win.

“We had some long sustained drives and we were able to finish drives,” Gruden said. “It’s hard to go 90 yards against a defense like that with Miller and Chub with Chris Harris and Fangio.”

The All-Pro Von Miller, and second-year standout Bradley Chubb, were virtually invisible the entire game as the repatched Raiders offensive line dominated most of the game. Oakland’s OL constantly won the line of scrimmage, and not only did the line create holes for the rookie Jacobs, but the unit also protected Carr.

After a short week, the Raiders have an even bigger challenge ahead as they prepare for a home game against defending AFC West champions the Kansas City Chiefs.