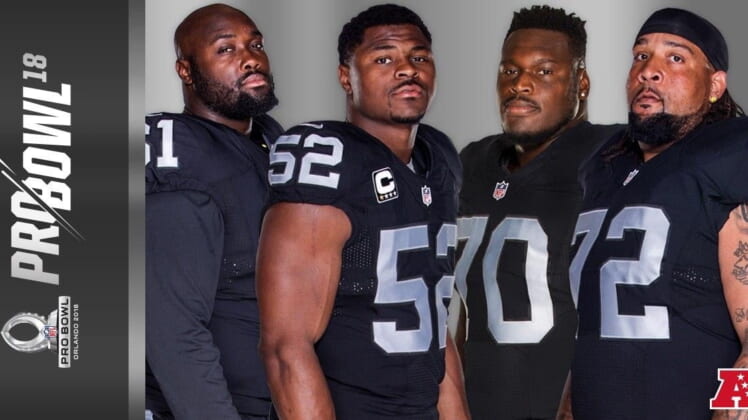 The season may not have gone the way the Oakland Raiders or their fans would have wanted it to, but four players were recognized Tuesday for great performance on the field being named to the AFC Pro Bowl Squad.

While Raider Nation licks its wounds after a tough loss this week in Oakland, the Raiders were given great news today as four players were named to the 2018 AFC Pro Bowl squad.

This season’s Pro Bowl will be played at Camping World Stadium in Orlando on January 28, 2018.

It marks the third-straight Pro Bowl for Mack who has started all 14 games for the Raiders this season, racking up 77 tackles (56 solo), a Raiders-leading 10.5 sacks, and even a career-high five passes defensed this season.

Penn, Hudson, and Osemele make up a majority of the stout Raiders offensive line. Penn was also selected for a third time and both Osemele and Hudson were selected for their second Pro Bowl.

Oakland’s offensive line has excelled in pass protection this year, as the unit is tied for the fourth fewest sacks allowed in the NFL, yielding just 21, and rank fifth in sacks surrendered per attempt, conceding a sack on just 4.2 percent of passing attempts. The Raiders’ 115 yards lost due to sacks is the third fewest in the league. The line has also helped pave the way for the offense to rush for at least 100 yards in eight contests this season.