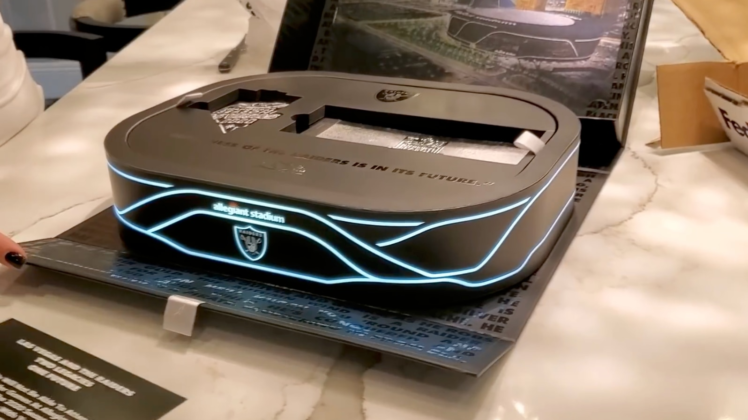 With no games to attend, the delivery of the Las Vegas Raiders season tickets to those who purchased them for 2020 was a bit bittersweet. But innovative packaging made it a little less hard to swallow.

By now, if you’re a Las Vegas Raiders fan, you’ve probably already seen one or a dozen “unboxing” videos of fans receiving a special delivery on Friday. Raiders season tickets arrived for those who invested in PSLs at the new Allegiant Stadium and the packaging alone created a slew of viral videos and social media posts nationwide.

The Raiders season tickets package was a fully illuminated replica of the team’s new home – Allegiant Stadium and included some goodies for those fans who were able to plunk down the cash to buy tickets in the inaugural season in Las Vegas. It also played the iconic Raiders theme “The Autumn Wind.”

The package included the Raiders uniform patch unveiled the same day during the team’s scrimmage at Allegiant Stadium. The patch commemorates the team’s first season in Las Vegas is already in high demand online.

The commemorative tickets include original artwork created for the Raiders from a group of artists including former quarterback Todd Marinovich. Marinovich was commissioned to do several pieces for the stadium and the Raiders new headquarters in Henderson by owner Mark Davis. Part of that art made it onto the Raiders season tickets as well.

The Raiders season tickets packages are in high demand on eBay already with some sellers asking north of $900 for just the box. With the rabid nature of collectors in Raider Nation, they might just get it.

The same day the season ticket packages were received, the Raiders held their first scrimmage at Allegiant Stadium – in full uniform. The practice allowed the team, stadium staff, and the media to get a taste for the new facility and for a dry run for the regular season. The Raiders – without fans in the stands – will officially christen Allegiant Stadium on Monday Night Football September 21st against Drew Brees and the New Orleans Saints.