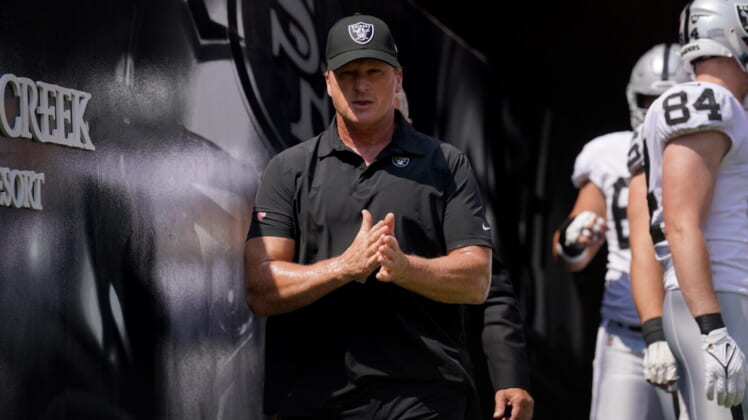 While the Dallas Cowboys and Tampa Bay Buccaneers kicked off the 2021 NFL campaign with a thrilling back-and-forth affair on Thursday night, Las Vegas Raiders fans anxiously await the Silver and Black’s season-opening Monday Night Football matchup with the Baltimore Ravens. Despite the anticipation, Raiders season prediction might have Raider Nation feeling a bit less optimistic.

Under head coach Jon Gruden, the Raiders have made moderate and incremental improvements in the past three years. Though Las Vegas has yet to make the playoffs since his return, its numbers in the win column trend in the right direction.

One day after final roster cuts, general manager Mike Mayock spoke to reporters about his expectations for this season.

“I think Jon and I would both tell you that we feel like we need to be a playoff team this year. And I don’t think there’s any doubt about that. And you guys are all going to put that in your headlines and I understand it. But that’s what the expectation is. We think we’ve done the infrastructure work necessary to put us in position. We’ve got to take care of business.”

Over the past two terms, the Raiders have reached the week of Thanksgiving with the playoffs in their sights only to fall flat in December and finish with non-winning records. Based on Mayock’s comments, he expects that pattern to change in 2021.

Will Vegas break through for a playoff berth? We’ll give our win-loss projections with an in-depth look at the Raiders’ strengths and weaknesses with context for their final record. Here’s a look and how we’re coming up with our Raiders season prediction for 2021.

The Raiders have a troubling combination of inexperienced wide receivers and potentially three new starters along the offensive line. Gruden may lean on the ground game more than the passing attack as his five-man front in the trenches jells in the early part of the season.

On top of that, the Raiders don’t have much quality depth behind their unproven offensive line. Brandon Parker can play both tackle positions, but he’s mostly struggled during the past three years.

Vegas signed center Nick Martin, who can hold his own in pass-blocking situations but tends to lose power battles as a run-blocker. Also, he only has experience at the pivot, so the Raiders may have to rely on Jermaine Eluemunor, who’s only played 208 career snaps at guard, per Pro Football Focus (subscription required), for depth on either side of the center spot.

Ruggs had an underwhelming rookie campaign with just 26 catches for 452 yards and two touchdowns. Meanwhile, Bryan Edwards caught 11 passes for 193 yards and a score. Both should take significant steps in development following a full offseason.

However, quarterback Derek Carr may not have a lot of time to develop a rapport with his young wideouts if the offensive line doesn’t provide reliable protection. The unit hasn’t established much chemistry in live action. According to Pro Football Focus, James played the fewest preseason snaps (23) among the offensive linemen while Leatherwood tied Brandon Parker for the second-fewest snaps (39).

Without wideout Nelson Agholor, who had a career revitalization in Vegas last season, Carr needs a receiver to take some pressure off star tight end Darren Waller, who will have multiple defenders draped all over him.

Gus Bradley should be an upgrade over former defensive coordinator Paul Guenther, but his defensive units have struggled in two areas: run defense and takeaways.

Dating back to his time as the Jacksonville Jaguars head coach in 2013, Bradley’s run defenses have ranked 18th or worse in six out of eight seasons. His units have mostly struggled to force turnovers after his time with the Legion of Boom, ranking 24th or worse six times over the last eight years.

If the Raiders cannot force turnovers and rely on three-and-outs, defenders may run out of gas late in games, which could lead to big plays for the opponent.

The Raiders’ strengths can mask some of their troublesome areas. Vegas selected Leatherwood with the 17th overall pick in the draft. Right out of the gate, the 6’5″, 312-pounder will make his presence felt on run-blocking downs. He brings a mix of power and athleticism to the position, which will allow him to go on seek-and-destroy missions while Josh Jacobs and Kenyan Drake run the ball downhill.

Leatherwood can reach second-level blocks to open up wide lanes for ball-carriers. He’ll also put a defender on his backside with strong active hands. Jacobs and Drake will see daylight when they run behind the Alabama product.

Speaking of Jacobs and Drake, they’re one of the better running back duos in the league. Both can grind out yards with little room to run and finish drives, which may solve the Raiders’ red-zone issues. The two running backs scored a combined 22 touchdowns last season—18 of them from inside the 8-yard line.

Vegas may also have one of the best tight end tandems in the league. We all know what Waller can do on the field. He holds the franchise record for most receptions (107) in a single season and logged 1,100-plus receiving yards in back-to-back years.

This year, Foster Moreau will likely raise his career profile as a viable pass-catcher. Coming off a torn ACL, he played sparingly behind Jason Witten last season. Now healthy, the LSU product can become a red-zone threat. He caught the second-most touchdowns (five) on the team in his first year.

By the way, the Raiders play against six teams that ranked top-10 in scoring defense with some overlap in five opponents that listed top-10 in sacks last year

The Raiders will field an offensive line with question marks, but they have multiple pass-catchers who can find a hole defenses with a quick slant, hitch, or comeback route. Hunter Renfrow, Ruggs and Drake can all serve as solid targets in the short passing game in case Carr resorts to check-downs.

For the first time in recent memory, the Raiders have a deep linebacker corps, which includes Cory Littleton, K.J. Wright, Nick Kwiatkoski, Nick Morrow (IR), Denzel Perryman, Javin White (IR) and rookie third-rounder Divine Deablo. Even though Bradley’s defenses have struggled to plug holes against the run, he has capable second-level defenders who can fill gaps on early downs.

Maxx Crosby and Yannick Ngakoue have the potential to change the complexion of the defense. If they’re able to consistently pressure the pocket, the Raiders can force turnovers on strip-sacks and intercept hurried or errant throws downfield.

Here’s an impressive stat: Crosby and Ngakoue have played seven combined seasons and neither has finished a campaign with fewer than seven sacks. Together, they’ll wreak havoc to provide a respectable pass rush.

Despite this, the Raiders season prediction isn’t as rosy as some may make it sound.

In a 17-game season, with COVID-19 still a factor in player availability, every team needs quality depth. Unfortunately, the Raiders don’t have it in a critical area. If left tackle Kolton Miller cannot play for whatever reason, Carr may not have time to drop back before a defender lays a hand on him.

Vegas has a questionable starting offensive line, so the unit has very little margin for error. That’s problematic for a team that will see a Vic Fangio-coached defense (twice) with Von Miller and Bradley Chubb on the field. Additionally, the Los Angeles Chargers hired Brandon Staley, who led the No. 1 defense with the Los Angeles Rams last year. He didn’t bring cornerback Jalen Ramey or defensive tackle Aaron Donald with him, but he has a healthy Joey Bosa and Derwin James—for now.

By the way, the Raiders play against six teams that ranked top-10 in scoring defense with some overlap in five opponents that listed top-10 in sacks last year. Teams will push Carr, his offensive line and a trio of young receivers to their limits all year long.

If the offensive personnel stumbles in the first five weeks, Vegas could fall behind in the standings. With its recent issues in the second half of seasons, that’s a tough hole to climb out of with road games against the Kansas City Chiefs, Cleveland Browns and Indianapolis Colts on the back-end of the schedule. Sure, the Raiders beat the Chiefs and Browns last year, but they did it in the first half of the year before their late-season swoon.

Ultimately, the Raiders will need their offensive starters to play a vast majority of the games. On paper, Las Vegas isn’t a terrible team, but a lack of proven playmakers on the perimeter without a strong offensive line may hurt its run at the postseason.