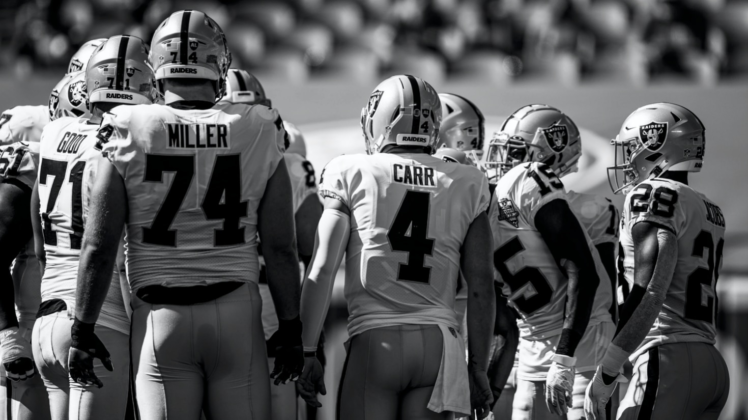 Sr. NFL Columnist Moe Moton discusses how the Las Vegas Raiders and their season changed due to leadership growth for Derek Carr and a team that won big at a place they had not in quite a while.

Following a 30-23 loss to the Buffalo Bills, Las Vegas Raiders quarterback Derek Carr had expressed his frustrations candidly, which seemed to adjust the team’s collective mindset before they went into Arrowhead Stadium and defeated the Kansas City Chiefs.

“I’m sick of losing,” Carr said in the postgame presser. “I’m sick of working as hard as I do, and as we do, and going out there and losing. I mean, it sucks. Enough is enough.”

Carr’s words didn’t fall on deaf ears. In the opening of last Wednesday’s media presser, he said the team held a meeting in which the players (including himself) took accountability for not playing up to a certain standard—something that head coach Jon Gruden talks about.

The Raiders set the tone before their biggest challenge of the season. Carr hadn’t beaten the Chiefs in two years. Gruden didn’t have a win against Kansas City since his return. Carr even pushed back on calling the division matchup a rivalry.

“If we’re being honest, to make it a rivalry we got to win some games [against them],” he said when asked by our own Scott Gulbransen. “They’ve had our number for a little bit.”

During Chiefs week, few people gave the Raiders a chance to win the game. Some fans rolled their eyes because they’ve heard variations of what Carr said in the past without significant results on the field.

This franchise has made the playoffs once in 18 years. Technically, this team cannot say it’s addressed its losing ways until Vegas finishes the 2020 campaign with a winning record or a playoff berth. That’s how the Raiders should approach the remainder of the year.

It’s one thing to say a team has unlimited potential, but the players have to go out and prove it—that’s what changes the Raiders’ 2020 season outlook. The Silver and Black beat the reigning champions who went into the contest undefeated. On paper, Vegas won’t have a regular-season win bigger than that unless it’s a battle to clinch a playoff spot.

During the week, fans have called into Silver and Black Today on Raider Nation Radio 920 on a football high, asking if the Raiders have a chance to push for a playoff spot, the AFC West crown, and a deep postseason run. Although the old adage goes, one game at a time, we can look at the schedule and think, why not?

Thus far, the Raiders have earned victories over three teams above .500: the Carolina Panthers, New Orleans Saints and Chiefs. They go into a Week 6 bye with multiple quality wins. Unlike last year, no one can question the validity of their winning record.

Because of injuries and parity across the league, we cannot pencil any team into the top spot in a division, but we can also ask, “why not the Raiders?” if the Chiefs have a few more losses.

Looking at the Raiders’ remaining schedule, they’ll play just four teams with winning records—three of those games at home with an extra week to prepare for the Tampa Bay Buccaneers in Week 7.

As far as a shift from pretender to a legitimate contender, Vegas’ early-season resume speaks for itself. If a team beats a Chiefs squad with all their offensive playmakers on the field at Arrowhead Stadium, that club is certainly capable of winning any game on the schedule—just ask defensive tackle Chris Jones:

Of course, the Raiders have to keep the momentum going after the bye. They cannot treat last week’s win as their Super Bowl and go on vacation for the next two-and-half months.

Starting with Carr’s unwillingness to accept excuses for injuries and youth to the team’s self-reflective Monday meeting, the Raiders have to hold on to that mindset.

This franchise has made the playoffs once in 18 years. Technically, this team cannot say it’s addressed its losing ways until Vegas finishes the 2020 campaign with a winning record or a playoff berth. That’s how the Raiders should approach the remainder of the year.

Nevertheless, last week’s victory gives the players tangible proof that they’re not only “sick of losing” but capable of turning things around going forward. As the case in individual matchups, expect some rough stretches, obstacles and crucial tests along the way. With that said, the Raiders have the tools to push through a post-bye week grind.

As we saw with the Chiefs, the Raiders can go score-for-score with any team.

Carr has performed at a level we haven’t seen since 2016. With wideouts Henry Ruggs III and Nelson Agholor adding speed on the perimeter, the has offense evolved in Year 3 under Gruden. According to Pro Football Focus, Carr is tied for ninth in passes completed 20-plus-yards downfield with a 143.8 passer rating in deep-ball attempts, which ranks second among quarterbacks with at least five passes of 20 or more yards.

Devontae Booker serves as a solid complement to Josh Jacobs in the backfield. Vegas recorded at least 116 rushing yards in four out of five outings. The offense can beat teams on the ground or through the air, which gives Gruden flexibility in his weekly game plans.

In Week 5, Paul Guenther’s much-maligned defense became the only unit to sack quarterback Patrick Mahomes multiple times (three) in a game. If Vegas can see more consistency from that side of the ball, we can potentially talk about mid-January games. For now, the group must continue to stack solid performances.

The phrase “statement game” is often tossed around liberally, but we cannot look at the Raiders in the same light after their victory over the Chiefs. Raise your expectations a bit, let go of the past bumbling, stumbling squads that found ways to lose games.

In a quarterback league with Carr’s high-level play, his dynamic weapons, and a defense showing signs of improvement, the Raiders have a good chance at a double-digit win season.